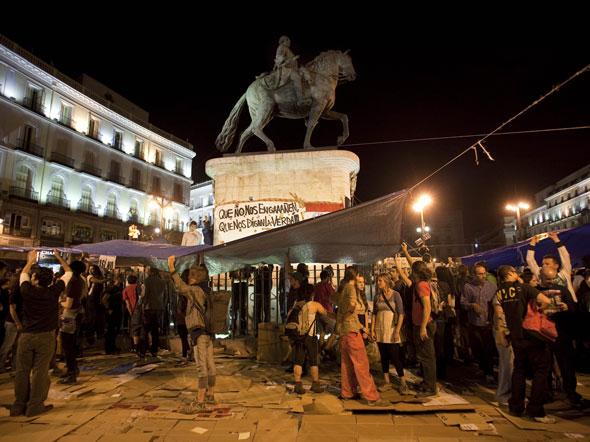 Gerald Celente predicted in February that the Middle Eastern and North African protests would spread to Europe:

It is not solely the Middle East that is destined to experience episodes of violent upheaval. What is transpiring in the Arab world will spread throughout many European states. While the call to arms will be spoken in different tongues, the underlying causes will be the same.

In December 2010 (before Tunisia made the headlines) we issued a Trend Alert titled, ?Off With Their Heads!? in which we predicted a ?long war between the people and the ruling classes.? We noted that, ?Anyone questioning the intensity of the people?s seething anger is either out of touch or in denial.?

It wasn?t Arab anger that led us to that forecast ? it was the student and worker revolts spilling into the streets of Europe. The imposition of draconian austerity measures ? higher taxes, tuition hikes, lost benefits, curtailed services, public sector job cuts ? had young and old raging against a rigged system that paved the way for the privileged and punished the proles.

Though millions marched through the streets of Athens, Brussels, Dublin, Lisbon, London and Madrid, when the protests ended, the governments were barely shaken, let alone toppled. Unlike the autocratic Arab regimes, where the tight grip of repression could only be broken by violence, in the ?democratic? West the illusion of representation and placating government promises mitigated the violence.

Both the press and politicians assumed the protests would run their course, people would accept their fate, and, like it or not, suffer the consequences.The protests, however, have not run their course. The economic toll of austerity and unemployment continues to ravage the lower and middle classes. As we wrote in the Winter 2011 Trends Journal, ?It will only be a matter of time before a series of final-straw events breaks the public?s back, setting off uncontrollable uprisings, coups (bloodless and/or military), riots and revolts throughout the financially battered world.?

Indeed, the protests in Madrid, Spain are eerily similar – if smaller and shorter – to Tahir Square, Egypt 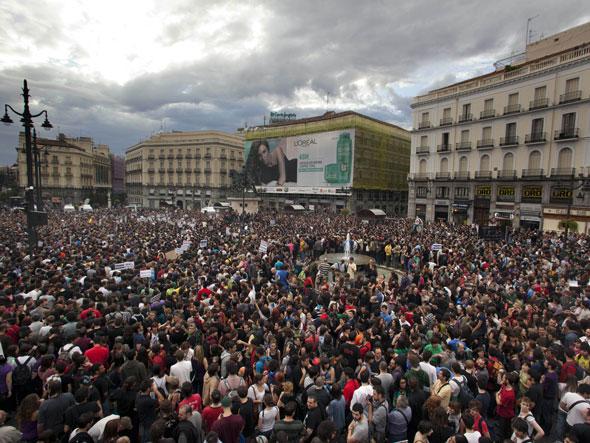 Citigroup is projecting that unemployment in Spain will rise from its current 17.9% to 22% next year.

Spain’s unemployment is largely driven by the bursting of its housing bubble.

I warned last year that – because the Spanish government had taken on the debt of its giant banks – it was in line as one of the dominoes to fall from the European debt crisis.

Instead of helping the Spanish people and small businesses, the government has bailed out its big banks and then implemented austerity measures to try to dig its way out of its fiscal hole.

That’s why people are protesting.

As I wrote last November:

Niall Ferguson, Marc Faber, and SocGen’s Edwards and Grice predicted 9 months ago that the European debt crisis would eventually spread to America.

But the question of what country the “contagion” might spread to next is really the wrong question altogether.

The real question is whether the wealth of the people around the world will continue to be shoveled into the bottomless pit of debts held by the big banks, or whether the people will prevail and the giant banks and bondholders will be forced to take a haircut.