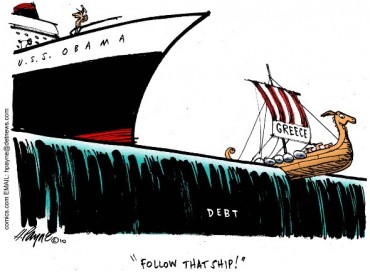 It could be the default heard around the world. If Greece can no longer make payments on its national debt, the financial shockwaves may rock your local bank.

As the Greek government teeters and European countries appear deadlocked over a rescue plan, holders of Greek debt face the biggest immediate risk. But the question many investors are asking ? just as they did when the collapse of Lehman Bros. sparked the Panic of 2008 ? is who, exactly, holds that debt?

?This fear of Greek contagion breeds not only a credit crisis but a liquidity crisis, not only in Europe,? said Lincoln Ellis, a managing director at the investment firm Linn Group. ?It could spread to the American banking sector as well.?

Much of Greece?s shaky debt is held on the books of large European banks, which would take the brunt of the impact of a possible default. With the odds of that increasing, bond rating agency Moody?s investor Service on Thursday threatened to downgrade credit ratings for three major French banks: BNP Paribas, Credit Agricole and Societe Generale over their exposure to Greek debt.

The banks have said that any default by Greece would be manageable. But in a world where markets are so interconnected, financial risk flows down the same river of capital. Those French banks, for example, raise a sizeable chunk of money by selling debt to the ten largest U.S. money market funds.

As U.S. banks have expanded to compete on a global playing field, they’ve increased their exposure the financial stresses on European lenders. Just as the Panic of 2008 was sparked by a relatively small pool of subprime mortgages, a default by Greece could spark wider defaults by subprime government borrowers like Portugal, Spain and Ireland.

U.S. bankers could also be at risk if they’ve lent too much money to investors placing big bets, so-called credit default swaps, that are supposed to pay off if Greece defaults on its bonds. But, much like the lead-up to the Panic of 2008, it?s not well-known just who is holding the losing side of those bets.

The risk to the banking system is that a concentration of bad bets overwhlems one of the nodes in the global financial network, short-circuiting the credit markets and forcing up the cost of borrowing. Much the same thing happened in 2008, when insurance giant AIG was inundated with a flood of redemptions for credit default swaps on mortgage debt that forced the Federal Reserve to have to help bail the company out.

The letter cited a recent report published by the Bank for International Settlements showing what the Senators said “appears to be nearly $200 billion in direct and indirect exposure from U.S. firms to the debt of Greece, Ireland, and Portugal.”

Coburn and Corker asked for more information on “how American financial institutions, and by extension the American economy, would be impacted by a default of one or more of these countries.”

Greece?s debt problems have also invited comparisons to the current debate in Washington over the U.S. budget. The comparisons are not all that meaningful. While the U.S. economy ? which is some 50 times bigger than Greece’s ? is muddling through a weak recovery, Greece is suffering through a accelerating recession. Greece’s economy contracted by 7.4 percent (on an annual basis) in the fourth quarter of last year after shrinking by 5.5 percent in the second and third quarters. The U.S. also benefits from the dollar?s role as the world?s reserve currency.

For now, worries about the impact of a Greek default on the euro have sent investors fleeing to the relative safety of the dollar and U.S. Treasuries. But the longer Congress and the White House remain deadlocked over raising the Treasury?s legal borrowing authority, the greater the likelihood that buyers of U.S. debt demand higher interest rates to cover the increased risk of default.

The sword of a debt downgrade is hanging over the U.S. too. Credit rating agencies have said the nation’s pristine AAA debt rating is threatened. That means a bet on dollar-backed securities ? usually as safe as it gets ? is at risk because the U.S.’s massive debt burden puts it at risk of default.

Though the prospect of a Greek-like default in the U.S. remains remote, it?s just one more worry on a long list of concerns that has fueled renewed pessimism in the economic outlook. Uncertainty about the impasse over how to trim the U.S. deficit has been a major reason businesses have slowed their hiring plans, according to William Dunkelberg, president of the National Federation of Independent Businesses, a trade Association representing small businesses.

?They?d like some idea of how Congress is going to fix the budget problem,? he said. ?Are they going to raise my taxes or are they going to cut spending? Or are we going to do nothing and blow up like Greece in which case we have riots on the streets and I have to start boarding up my windows??