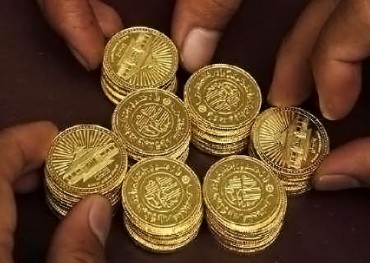 Under the guise of “protecting civilians,” the United States led NATO into Libya and is attempting to assassinate the Libyan leader. Of course, Libya happens to be the largest oil producer in Africa, but many do not realize that Gaddafi was planning to introduce the gold dinar, a single African currency that would serve as an alternative to the U.S. dollar and allow African nations to share the wealth. It is surely no coincidence that Iraq’s prior leader, Saddam Hussein, was trying to do the same thing just prior to U.S. invasion for all of those “weapons of mass destruction.”

Simply put, if oil-rich nations begin trading in something other than dollars it will significantly reduce demand for dollars and threaten the dollar’s role as world reserve currency. Many experts believe this would lead to the quick death of the fiat greenback, which is now backed by nothing but faith in a government that is running an annual budget deficit of over $1.5 TRILLION.

The dollar’s days are numbered and savvy investors are using the current dip (the article was originally published in may) in gold and silver prices to exit their dollars and acquire real money that cannot be printed out of thin air and inflated to worthlessness. The CME knows there is not enough silver to go around and their raising of margin requirements 5 consecutive times in the past two weeks smacks of desperation. Far from the hysterical crises of the precious metals bubble popping, it is only going through a healthy and necessary correction before gold targets $1,800 later this year and silver takes out $50 without looking back.

Some believe it is about protecting civilians, others say it is about oil, but some are convinced intervention in Libya is all about Gaddafi’s plan to introduce the gold dinar, a single African currency made from gold, a true sharing of the wealth.

“It’s one of these things that you have to plan almost in secret, because as soon as you say you?re going to change over from the dollar to something else, you?re going to be targeted,” says Ministry of Peace founder Dr James Thring. “There were two conferences on this, in 1986 and 2000, organized by Gaddafi. Everybody was interested, most countries in Africa were keen.”

Gaddafi did not give up. In the months leading up to the military intervention, he called on African and Muslim nations to join together to create this new currency that would rival the dollar and euro. They would sell oil and other resources around the world only for gold dinars.

It is an idea that would shift the economic balance of the world.

A countr’s wealth would depend on how much gold it had and not how many dollars it traded. And Libya has 144 tons of gold. The UK, for example, has twice as much, but ten times the population.

“If Gaddafi had an intent to try to re-price his oil or whatever else the country was selling on the global market and accept something else as a currency or maybe launch a gold dinar currency, any move such as that would certainly not be welcomed by the power elite today, who are responsible for controlling the world?s central banks,” says Anthony Wile, founder and chief editor of the Daily Bell.

“So yes, that would certainly be something that would cause his immediate dismissal and the need for other reasons to be brought forward from moving him from power.”

And it has happened before.

In 2000, Saddam Hussein announced Iraqi oil would be traded in euros, not dollars. Some say sanctions and an invasion followed because the Americans were desperate to prevent OPEC from transferring oil trading in all its member countries to the euro.

A gold dinar would have had serious consequences for the world financial system, but may also have empowered the people of Africa, something black activists say the US wants to avoid at all costs.

The UK’s gold is kept in a secure vault somewhere in the depths of the Bank of England. As in most developed countries, there is not enough to go around.

But that is not the case in countries like Libya and many of the Gulf States.
A gold dinar would have given oil-rich African and Middle Eastern countries the power to turn around to their energy-hungry customers and say: “Sorry, the price has gone up, and we want gold.”

Some say the US and its NATO allies literally could not afford to let that happen.