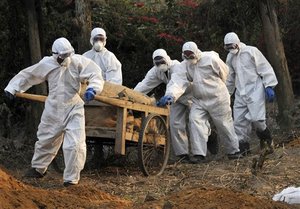 (Reuters) – The United Nations warned of a possible major resurgence of bird flu and said a mutant strain of the H5N1 virus was spreading in Asia and elsewhere.

The UN’s Food and Agriculture Organization (FAO) on Monday urged increased surveillance and preparation for a potential outbreak of the virus, which it says has infected 565 people since it first appeared in 2003, killing 331 of them.

The virus was eliminated from most of the 63 countries infected at its peak in 2006 after mass poultry culling, but since 2008 it has been expanding geographically in both poultry and wild birds, partly due to migration patterns, the FAO said.

“The general departure from the progressive decline observed in 2004-2008 could mean that there will be a flare-up of H5N1 this fall and winter,” the FAO’s chief veterinary officer, Juan Lubroth, said in a statement.

He said the appearance of a variant strain of the virus in China and Vietnam was a concern, because it appeared to be able to sidestep the defenses of existing vaccines.

The circulation of the virus in Vietnam also poses a direct threat to Cambodia, Thailand and Malaysia as well as endangering the Korean peninsula and Japan, FAO said.

The latest human death occurred earlier this month in Cambodia, which has registered eight cases of human infection this year, all of them fatal, the agency added.

Countries that could face the biggest problems are Bangladesh, China, Egypt, Indonesia and Vietnam, where the FAO said the virus is still firmly entrenched.

“Wild birds may introduce the virus, but people’s actions in poultry production and marketing spread it,” said Lubroth.

“Preparedness and surveillance remain essential … no one can let their guard down with H5N1,” he added.