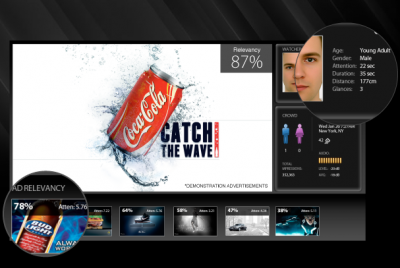 Picture this: You stop in front of a digital advertising display at a mall and suddenly an ad pops up touting makeup, followed by one for shoes and then one for butter pecan ice cream.

It seems to know you’re a woman in your late 20s and, in fact, it does. When you looked at the display, it scanned your facial features and tailored its messages to you.

Once the stuff of science fiction and high-tech crime fighting, facial recognition technology has become one of the newest tools in marketing, even though privacy concerns abound.

The Venetian resort, hotel and casino in Las Vegas has started using it on digital displays to tailor suggestions for restaurants, clubs and entertainment to passersby.

Kraft Foods Inc. and Adidas say they are planning to experiment with it as early as this year to push their products.

A group of U.S. bar owners in Chicago last month started using facial recognition, in conjunction with mounted cameras, to keep tabs on the male/female ratio and age mixes of their crowds. Patrons planning a night out can use mobile apps to get a real-time check of a venue’s vibe.

“This helps people avoid those hit-or-miss nights,” said Cole Harper, 27, co-founder of the SceneTap company that makes the app.

The commercial applications of facial recognition are in contrast to those being used by law enforcement to identify specific individuals. Companies, at least at this point, mostly just want to pinpoint a demographic based on age and gender to tailor their ads.

But even this facial recognition-lite alarms privacy advocates, given that it could greatly popularize and expand use of the technology.

“You can put this technology into kiosks, vending machines, digital signs,” said Christopher O’Malley, director of retail marketing for Intel’s embedded and communications group. “It’s going to become a much more common thing in the next few years.”

So far, the technology is in most use commercially in Japan, where a variety of businesses use it to customize ads.

“It’s not just clothing stores or restaurant chains,” said Joseph Jasper, spokesman for NEC Corp., which makes display screens used for facial recognition-driven ads. Banks, for example, use it to target customers based on their ages, separating out older customers from young people who are more likely to be opening their first account.

The technology works by digitally measuring the distance between the eyes, the width of the nose, the length of a jawline and other data points. Law enforcement agencies that use facial recognition ? as was done during the recent London riots ? compare the measurements against photos in databases.

But for most marketing uses, the measurements are compared to standardized codes that represent features typical of males and females in various age brackets.

Adidas is working with Intel to install and test digital walls with facial recognition in a handful of stores either in the U.S. or Britain. If a woman in her 50s walks by and stops, 60% of the shoes displayed will be for females in her age bracket, while the other 40% will be a random sprinkling of other goods.

“If a retailer can offer the right products quickly, people are more likely to buy something,” said Chris Aubrey, vice president of global retail marketing for Adidas.

Kraft said it’s in talks with a supermarket chain, which it would not identify, to test face-scanning kiosks.

“If it recognizes that there is a female between 25 to 29 standing there, it may surmise that you are more likely to have minor children at home and give suggestions on how to spice up Kraft Macaroni & Cheese for the kids,” said Donald King, the company’s vice president of retail experience.

Privacy advocates worry the technology is one more way for companies to quietly gather data about people without their permission or even knowledge. In June, Facebook Inc. rolled out a facial recognition feature worldwide that could pinpoint individuals. It was used to automatically identify friends when you uploaded photos of them onto the social network.

When members realized this was happening, many loudly objected, calling it creepy and invasive. The feature still exists, but the company apologized and made it more clear how users can opt out.

Earlier this year, Google Inc. said privacy concerns drove the company to abandon a project for mobile phones that would have enabled users to snap photos of someone and then run a search online for other photos of the person.

“We built that technology and we withheld it,” Google Executive Chairman Eric Schmidt said at the D: All Things Digital conference in May. He said the decision was made because “of the fact that people could use this stuff in a very, very bad way as well as in a good way.”

The nonprofit Electronic Privacy Information Center said such uses of facial recognition have the potential to violate civil liberties and give governments too much power.