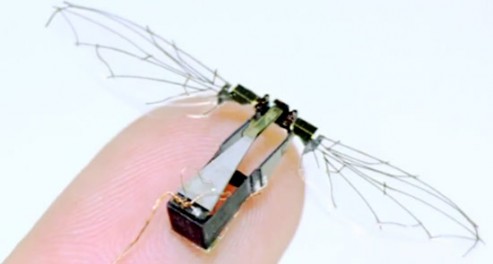 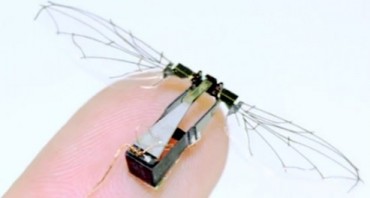 If Air Force researchers have their way, the military?s next flying robots of doom will be tiny, and indistinguishable from the naked eye from small birds, bats or even insects.

And they?ll take their first flight in a freaky ?Micro-Aviary? in Ohio, where engineers make mini-machines modeled on those creatures of the sky.

Miniaturization is a major trend in drone tech. The Army?s new Switchblade drone is a semi-autonomous missile shot out of a mortar tube for kamikaze missions. Some robotic aircraft manufacturers, like the micro-machinists at AeroVironment, have even started experimenting with super-small drones that look like hummingbirds ? and even dragonflies.

The Navy took the next step. Rather than merely modeling a drone chassis on a bird or insect, the Navy started studying the behavioral and migratory patterns of birds, fish and bats to develop a more realistic robot facsimile.

The Air Force, however, is taking the step beyond that.

At the Micro-Aviary at Wright-Patterson Air Force Base, researchers rig the walls with super-sensitive motion capture sensors that track a tiny plane or helicopter?s position ?within about a tenth of an inch,? according to researcher Greg Parker.

And how. One of the vehicles on display in the video above, released by the Air Force Research Laboratory at Wright-Pat, is a robot dragonfly. It doesn?t appear to be much more than a circuit board, a super-tiny motor and two insect-like wings. And it fits, like a bug, on the tip of someone?s finger.

Fitting a camera on a drone that small is a the next hurdle that miniaturization tech will have to clear if the ?Micro-Aviary?s? birds are to be practical. Another option: Engage in a little insect vivisection to create a swarm of spying cyborg bugs.

That extremely gross goal is the point of Darpa?s Hybrid Insect Micro Electromechanical Systems (HI-MEMS) program. To ?provide control over insect locomotion? One researcher in 2008 inserted a mechanized system into a moth?s thorax during its larval stage. Insect tissue actually grew around the machine.

Still, that?s, er, gross. The Air Force?s Micro-Aviary is a lot less creepy and arguably more practical. In a few years, the chirp you hear from the bird perched on the telephone line outside your apartment might be the whir of a robotic hummingbird as its camera adjusts its aperture.

Air Force Keeps ?Micro-Aviary? Of Tiny, Bird-like ?Bots
http://endtimeinfo.com/2011/11/air-force-keeps-%e2%80%98micro-aviary%e2%80%99-of-tiny-bird-like-%e2%80%98bots/
cyborgsinsect dronesrobotsspyingsurveillance
Previous ArticleOut Of The Ashes Of The Collapse Of The Eurozone Will A “United States Of Europe” Arise?Next ArticleBanker Coup: Goldman Sachs Takes Over Europe