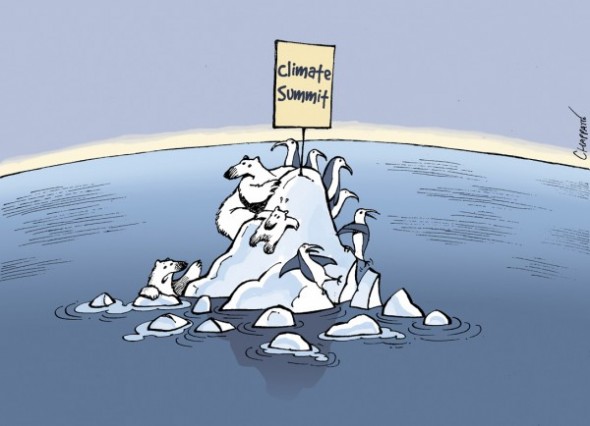 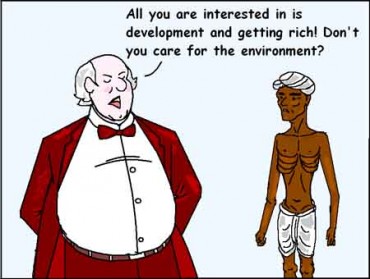 Bureaucrats at the UN Climate Summit in Durban have outlined plans for the most draconian, harebrained and madcap climate change treaty ever produced, under which the west would be mandated to respect ?the rights of Mother Earth? by paying a ?climate debt? which would act as a slush fund for bankrolling an all-powerful world government.

Even as the tattered shreds of whatever credibility global warming alarmists had left evaporate in the aftermath of Climategate 2.0, the monstrous bureaucracy behind ManBearPig continues to lurch forward.

?Here ? and, as always, you heard it here first, for the mainstream media have conspired to keep secret the Madness of King Rajendra and his entire coterie of governmental and bureaucratic lunatics worldwide ? is what the dribbling, twitching thrones and dominions, principalities and powers of the world will be asked to agree to,? he writes, adding that actual climate science has not been a topic of debate at the summit.

– The treaty calls for the west to achieve a 50% CO2 emissions reduction within the next eight years, a feat that would completely bankrupt the global economy and spark a new great depression, as well as a ?more than 100%? reduction by 2050, which presumably could only be accomplished by killing billions of humans to prevent them from exhaling carbon dioxide.

?So, no motor cars, no coal-fired or gas-fired power stations, no aircraft, no trains. Back to the Stone Age, but without even the right to light a carbon-emitting fire in your caves,? writes Monckton.

– The text calls for a 2 degree Celsius drop in global temperatures, which as Monckton points out ?would kill hundreds of millions? and herald a new ice age.

– The reduction in CO2 concentration the text calls for would actually begin to kill all plant life and trees on the planet because they need levels of carbon dioxide above 210 ppmv to survive.

– All military forces would be abolished because they contribute to climate change. Presumably the United Nations would then take on the role of world army to police the globe.

– The process will be enforced by an ?International Climate Court of Justice? under a bureaucracy of world government that will force western nations to pay ?climate debt,? as well as reparations to third world nations to pay for carbon cuts that wouldn?t be as drastic. The burden of ?historical responsibility? has been applied to industrialized nations, implying they are guilty for whatever the weather decides to do and must be punished for it.

– All the money will be collected by the UN and whatever is left after they have taken their considerable cut will be doled out according to the wishes of UN bureaucrats. ?As a senior UN diplomat told me last year, ?The UN exists for only one purpose: to get more money. That, and that alone, is the reason why it takes such an interest in climate change,? writes Monckton.

– Environmental enforcement arms of the UN will be given the power of a global government in the name of fighting climate change. ?The draft ?agrees that common principles, modalities and procedures as well as the coordinating and oversight functions of the UNFCCC are needed? ? in short, global centralization of political, economic and environmental power in the manicured hands of the Convention?s near-invisible but all-powerful secretariat. No provision is made for the democratic election of key members of the all-powerful secretariat ? in effect, a world government ? by the peoples of our planet,? writes Monckton.

– This world government will mandate that western nations submit reports every two years on their progress and then implement the measures demanded by the world government.

– The UN will create several new slush funds from which to enrich its coffers, including a tax on shipping and aviation fuel, a new ?green climate fund? and a worldwide cap and trade. Most of the costs will be handed down to taxpayers.

This merely scratches the surface of what the UN is trying to include in its ?legally-binding treaty,? which represents eco-fascism on steroids. Despite press reports that the text is once again likely to be rejected, Monckton points out that UN bureaucrats are confident they can get some form of deal rammed through on this occasion.