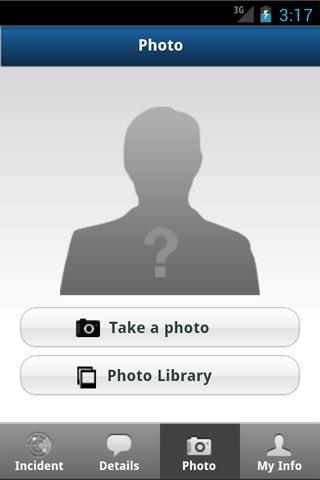 Snitching has eventually entered the digital age thanks to a new smartphone app that lets anyone, anywhere tell the police: ?Hey! That?s kind of weird!?

Authorities in the state of West Virginia are encouraging residents to install an Android and iPhone application that lets alerting law enforcement of suspicious activity become as easy as a click of a button ? or, for some smartphone owners, the touch of a screen.

The official government website for the state of West Virginia now prominently features a product available for download on select mobile devices. It?s the Suspicious Activity Reporting mobile application and it lets users type up notes about any mundane yet worrisome incident they witness and send it straight over to local law enforcement. The app even allows the user to capture and upload a photo of someone they might consider suspicious, only to then provide the police with a detailed visual description of someone who may ? or may not ? be up to no good.

“Through the use of innovative technology our citizens can download the new Suspicious Activity Reporting Application for free and help protect their own communities,” Governor Earl Ray Tomblin reasons with the West Virginia State Journal. “With the assistance of our citizens, important information can quickly get into the hands of our law enforcement community allowing them to provide better protection.”

But what constitutes suspicious, exactly?

The WV.gov website warns, ?This application is not intended for emergency purposes? and that in such an event the citizen should dial 911. What use does the app have then, other than to just say, ?This guy gives me the creeps?? The device?s manufacturers add that any tips, such as suspicious vehicles or mysterious packages, can be reported anonymously if the user opts for that choice. They are offering the product up for download free of charge.

Prior to hooking up with the makers of the Suspicious Activity Reporting app, or SAR, officials in West Virginia relied on residents to fill out oh-so-bothersome paper reports or, heaven forbid, log-on to their website to alert police of suspicious activity. Now not only is it easier than ever, but with smartphones capable of collecting high-resolution photos, video, audio and more, to a degree it is allowing detectives to outsource their surveillance operations to civilians.

On the official Google Android page that hosts the download for the application, the sole review salutes law enforcement for encouraging users to download the program. ?If every West Virginia resident that owns a smart phone (and knows how to use it) gets this app . . . you’ll literally have 10 citizen spy’s working for you!? reads the write-up.

Recently law enforcement in New Orleans, Louisiana began letting citizens submit tips over the Internet in lieu of their traditional 1-800 hotline. There police Chief Ronal Serpas said that ?people are willing to communicate? with officers more willingly by taking their citizen vigilance online, but others are just as concerned as some in West Virginia. In New Orleans, the cops are just responding to allegations of drug trafficking submitted online ? they are placing massive orange signs on the houses.

While the SAR app might not necessarily have as branding an effect, it could create fear across the state as citizens anywhere in public are put under an unlimited number of watchful eyes. In cities such as Manhattan, law enforcement can already rely on their thousands of surveillance cameras to snoop on citizens at seemingly every public space in the city. The catch there, however, is that most are aware. In West Virginia though, it seems as if the authorities are only encouraging people to stealthy become their own sleuths.

“The longer you wait, the less accurate eyewitness information becomes and evidence fades,” Thom Kirk, director of the Fusion Center, stresses to the Journal. “Enabling the information to be sent at the time the activity is taking place will not only improve the accuracy of the report, but also improve the ability of the authorities to respond quickly.”

Keep in mind, of course, that 911 says emergencies should be handled otherwise, though.

Last year the town of Farmington Hills, Michigan was outfitted with around a dozen, $3,000-a-piece lampposts that double as surveillance cameras and WiFi hubs that allow police to monitor remotely from miles away. While its inventor insisted at the time, ?This is not a system with spook technology,? authorities can indeed log-in to the lampposts and keep an eye on the tiny town.

In Farmington Hills, a Federal Energy Efficiency and Conservation Block Grant for $791,300 helped fund the project. The SAR app in West Virginia was developed free-of-charge in part by the state?s own Division of Homeland Security.