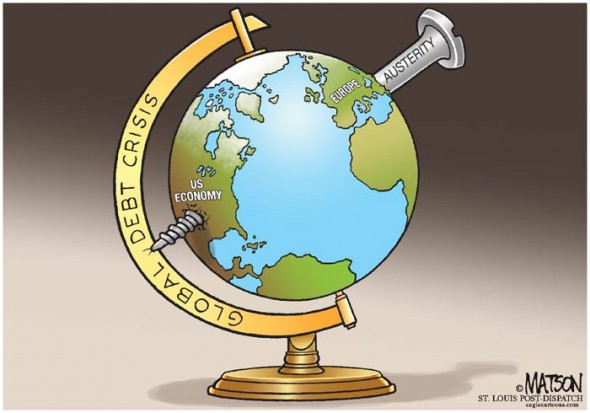 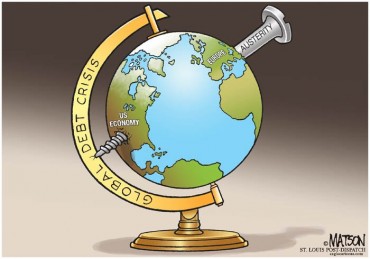 Free-Market Analysis: Almost unnoticed, the world’s leaders now speak in terms of trillions rather than billions (or millions) as they used to, and the IMF and central banks are leaders in this trend (see above excerpt).

The goal of the elites running these facilities is world government and the European Union is a stepping-stone to this consolidation. Austerity, the program that is supposedly stabilizing European finances, is actually an elite dominant theme that does the opposite of its stated intent.

As part of this globalist thrust, the power elite seeks to empower certain international facilities with additional funding and authority. Out of chaos … order, as the article excerpted above once again illustrates:

Bowing to international pressure to do more while stopping short of a bolder proposal, European governments agreed last month that 500 billion euros ($654 billion) in fresh money would be placed aside 300 billion euros already committed to create an 800 billion-euro defense against contagion.

By also offering to give the IMF 150 billion euros, “European governments have done their part,” ECB Executive Board Member Joerg Asmussen said April 13. “I would now expect our non-European friends and partners to contribute their part to IMF resources.”

This kind of problem/solution formula is easy to understand for anyone who wants to look. The elites pursue their goals via dominant social themes, fear-based promotions that frighten people into giving up power and wealth to globalist facilities. In this case the mechanism is the “sovereign debt crisis” and the solution is to puff up the IMF with more resources.

The longer the so-called sovereign debt crisis goes on, the more the globalists utilize it to expand the power of their chosen institutions. We wrote about this phenomenon just the other day in an article entitled, “Debt Crisis Plotted to Deliver the Euro to the IMF?” Here’s how we explained the genesis:

One has to keep in mind the artificiality of the current economic construct. The economy of the world is run via monopoly fiat/paper money printed by central banks. It is this system that has seemingly crashed half of the world’s economy and is well on the way to delivering China into the same situation …

The EU crisis itself, as we have often pointed out, started when certain poorer countries were given large amounts of money by Brussels to “equalize” the economy. These funds were supposed to allow the bureaucracies to address native imbalances and create fiscal health.

Of course, this money was nothing but a kind of bribe. The elites of the given nation pocketed the funds and then made sure their countries entered the EU. After this occurred, further lending took place via the elite’s top, European commercial banks.

After the 2008 crash, it became clear that the EU’s PIGS couldn’t repay the loans. This was likely the plan all along. After this realization set in, the power elite that orchestrates this sort of thing ensured that the solution to this manipulated dilemma was “austerity.”

The idea is evidently and obviously to make people so miserable that they will eventually welcome world government and world money. The power elite orchestrating this has been using what we call directed history for at least a century and probably closer to three ? within the context of the modern globalist conspiracy.

The article we are analyzing today from Bloomberg suggests an expanded IMF based on the Euro crisis. But the IMF is also promoting a US$500 billion expansion via developing countries.

The justification is that the European crisis might spill over into other continents and nations. The IMF has to be prepared for via a half billion-dollar transfer from the very countries it claims to be protecting. Reuters reports the following:

In January, the IMF said it would need $600 billion in new resources to help “innocent bystanders” who might be affected by economic and financial spillovers from Europe … On Friday, officials from the Group of 20 nations told Reuters the world’s major economies were likely to agree to provide the IMF with somewhere between $400 billion and $500 billion.

A G20 official said the fundraising effort would likely raise about $50 billion from Japan and a similar amount from China and Saudi Arabia, in addition to the $250-300 billion already committed by EU countries. Smaller amounts will likely come from countries such as Russia, Mexico and Brazil.

Thus it is that the IMF expands. It is receiving at least US$150 billion from Europe and hundreds of billions from mostly “developing” countries. It is interesting that the Reuters article and the Bloomberg article don’t quite match up on the European contributions. What’s a few hundred billion among friends?

In fact, nobody REALLY knows how much money is flowing at the top, or where it is headed. The point of the reports is promotional and has little to do with accuracy. The idea is to throw vast sums around as to imbue government officials with godlike powers.

Often, we discover the announcements made about funds prove not to be true. The European sovereign debt crisis was supposed to have been solved years ago, when the first announcements were made that funds had been delegated to “fix” the problem by leading European sponsors.

In fact, we have come to realize this crisis ? like other crises around the world ? are often manufactured ones. This is no doubt why they often last so long. The longer the crisis lasts, the more possibilities for a transformative effect.

In this case it seems obvious to us that the intent is to make citizens of the West so miserable (via “austerity”) that they will welcome virtually any change, even globalism, that promises to make their lives better.

Seen through this admittedly cynical lens, the 20th century with all its “isms” and arguments for expanding government via socialism, etc., was the first part of a promotion that is now nearing its latter stages. Having successfully made people dependent on government, the powers-that-be are now removing those props in order to further their internationalist aims.

No doubt global governance will be sold the same way as were the initial governmental solutions of the 20th century ? as a panacea that will somehow reduce the world’s afflictions and rectify the wrongs of the “market.”

Conclusion: We are not yet sure the IMF is destined to become the world’s central bank ? complete with an SDR global currency ? but the IMF is continually showing up at the center of things as world economic chaos blossoms. More that the Bank for International Settlements or even the World Bank, it appears to be the Chosen One.