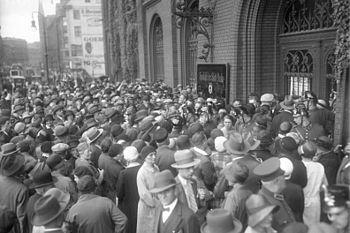 When the world teeters on the edge of another global war or catastrophic economic collapse, what then? With each crisis the world population is more and more ready to scream, ?Who will save us from this mess?? When the time is right, the Antichrist will offer the solutions. ?We need to come together more,? he will declare, ?and I have just the plan to make it happen!? – Joseph Candel

This is not the first time we?ve warned you about an imminent financial megashock.

In our Money and Markets of December 3, 2007, we specifically named Lehman Brothers as the next major firm to collapse on Wall Street. (See ?Dangerously Close to a Money Panic.?)

In our Money and Markets of March 17, 2008, precisely 182 days before its failure, we again named Lehman, making it abundantly clear that it could be the trigger of a financial meltdown. (See ?Closer to a Financial Meltdown.?)

And now, starting with last week?s edition, we are warning you of ANOTHER Lehman-type megashock.

A new telltale sign: Bank runs, the final nail in the coffin of any modern economy, are spreading among the PIIGS countries of Europe ? and possibly beyond.

In Greece it?s already a tsunami ? a desperate effort by millions of citizens to get their money out of danger before Greece is forced to leave the euro zone.

In Spain, it?s quickly turning into a flood, as individuals and businesses ? with $1.25 trillion in total bank deposits ? wonder if their country will be the next to leave the union.

In Portugal, Ireland, Italy or even France, banks are vulnerable to similar outflows. And once the stampede strikes more than two or three major countries, you could see bank runs all across Europe.

It should. Because last year we witnessed a very similar contagion when investors stampeded from the bonds of the weakest European countries.

Much like today, the first to be attacked was Greece, the weakest link in the chain. Then, Spain, Portugal, Italy and even France got hit hard.

Soon, nearly all of Europe was infected, prompting its central bankers to suddenly break their solemn vows of monetary piety and print more than $1 trillion worth of new euros.

Now, despite all those efforts, they?re facing a new contagion of a second kind ? by bank depositors.

But bank runs are far more infectious ? and dangerous ? than investor stampedes.

They spill out onto the streets and onto the airwaves.

They invoke frightening flashbacks to the Great Depression.

And they immediately threaten the entire banking system.

According to the New York Times, ?the havoc that a stampede might cause to the Continent?s financial system would greatly complicate efforts by European Union officials to fashion a longer-term plan to ease the debt crisis and revive Europe?s economy, because authorities would have to cope with the staggering added costs of shoring up banks.

??A bank run can happen very quickly,? said Matt King, an expert on international fund flows in London for Citigroup. ?You are fine the night before, but on the morning after it?s too late.??

And just as I explained here last week, the Times points out that it ?was a similar liquidity crisis on Wall Street in September 2008 ? which started with nervous investors pulling money from troubled institutions, then quickly from healthier ones ? that set off the financial crisis.?

I repeat: It was just last Monday that I showed you how Europe and the U.S. are now on a collision course with a second Lehman-type megashock.

And here we are today, only seven days later, with the snowball of events bringing us a few steps closer.