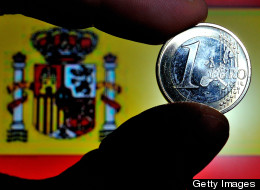 Just out from Bloomberg:

So Spain has shockingly agreed to a bank bailout without conditions. Has Germany? The chips will commence falling, where they may, shortly. In the meantime, we are days from finding out just what Germany thinks when it has to ratify (that?s right, the ESM has still not been ratified by the one country which will fund the Spanish bailout) the direct rescue of the Spanish banks. Without conditions.

All ready to rescue the fourth largest economy in the eurozone. Ministers of Economy and Finance of the euro area have concluded a few minutes of the meeting by teleconference 19.00 convened to decide on the future of Spain and, according to AFP, it was agreed that the Government seek the rescue, which will be IMF involvement. The agenda of the meeting, as previously reported in European officials left no doubt: ?The approval of a statement that highlights Spain?s intention to seek help and support of the Euro?. In fact, according to these same community sources during the meeting that has lasted nearly three hours, and figures have been considered a rescue that could reach 100,000 million euros, an amount which is well above what had speculated. However, the stakes ensure that clean once and for all Spanish banks, first, to restore confidence in Spain after and bring stability to the entire euro area, immersed in its worst crisis since the launch the euro.

Spanish Economy Minister Luis de Guindos, has called on the media in the Ministry of Economy at 19.30, which indicates that it has come to some agreement. The purpose of it, detailing the department, is to explain ?the results of the Eurogroup meeting? and ?actions on the recapitalization of the Spanish financial system.?

?The figure we are discussing now would be up to 100 000 million, but not yet closed ?and is a cap, have stated the sources consulted by AFP. Reuters also agrees with these figures, more than double that manages the IMF, estimated at 40,000 million injection needed for Spanish banks . The managing director of this institution, France Christine Lagarde, is also participating in the teleconference.

The final amount, however, probably will not be known today and will be implemented once they know the results of two independent audits commissioned by the Spanish government. Thus, the figure will be decided ?according to the results of needs analysis? of Spanish banks. In this respect, the Euro is expected to meet again in the near future to confirm the figure, while EU sources indicate that although the request for assistance is made this weekend, which is as safe, they add, the Government can wait a few days to provide a specific figure. At the end of the process, will the ECB and the European Commission have to quantify the aid will reach the Spanish banks.

More on this from Zerohedge:

Keep a close eye on Spanish sovereign bonds at the moment when the bond market understands what just happened, and once the euphoria over the very short-term bailout of insolvent Spanish banks passes. Because a month from today another ?100 billion will be required, then another ?100, and so on.

At that point even the officially acknowledged Spanish debt/GDP will surpass 100%.