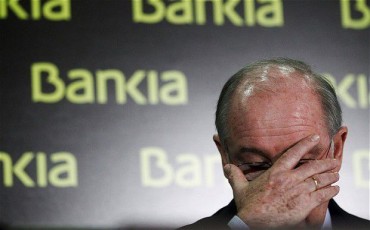 At a convenience store just off Madrid’s Plaza Mayor this past weekend, a customer paid for a six-pack with his debit card. Noting the name of the bank on the card, cashier Juanjo Martínez couldn’t resist a joke. “Sure you don’t want to buy anything else?” he asked. “Might as well use it while you still can.”

The humor in Spain has been dark ever since the crisis began four years ago. But in recent weeks, and especially in the past few days, the mood has turned decidedly blacker. On May 25, Bankia, the country’s fourth largest bank, admitted that it needed a total infusion of $29 billion in public funds to avoid bankruptcy. That same day, and every weekday since, the spread between Spain’s 10-year government bonds and their German counterparts has remained above the critical redline of 500, beyond which it becomes nearly impossible for a country to finance its debt. Gradually, the gallows humor is giving way to outrage.

The Pain in Spain: A Banking Scandal Makes the Crisis No Joke
http://endtimeinfo.com/2012/06/the-pain-in-spain-a-banking-scandal-makes-the-crisis-no-joke/
debt crisisfinancial crashSpain
Previous Article“The End Game: 2012 And 2013 Will Usher In The End” – The Scariest Presentation Ever?Next ArticleNew Study: Numerical and Science Literacy Cause Climate Change Skepticism