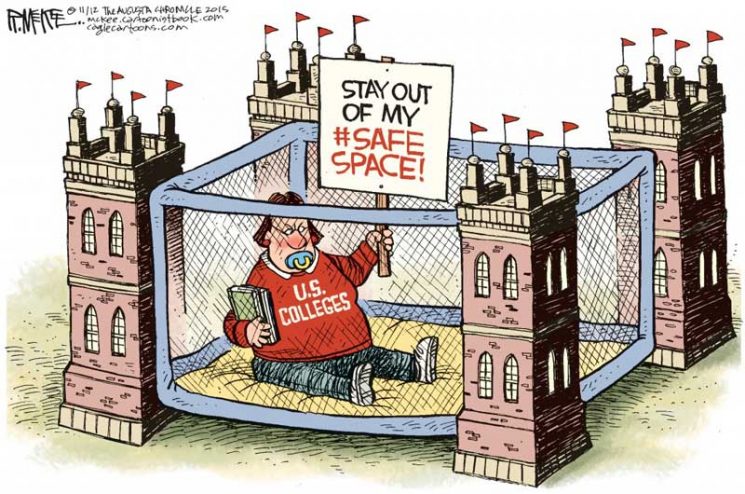 With social justice warriors everywhere still sobbing across the globe after sexist, racist, bigoted, misogynists, anti-semite, satan-worshipping, Putin-puppet (did we miss one?) Donald Trump’s election victory, it appears the special safe-space-seekers may be about to get a win in Britain where universities will be forced to pander to the demands of ‘snowflake’ students if controversial reforms placing student satisfaction at the heart of a new ranking system, are approved.

As “safe space” and “no platform” movements have swept across campuses, The Telegraph reports, the Government faces a cross-party revolt in the Lords this week over proposed reforms to higher education, which include placing student satisfaction at the heart of a new ranking system.

It is feared that this will lead to a “fantastically dangerous” culture where authorities will give in to student demands, however unreasonable they may be.

Baroness Wolf, a professor at King’s College London (KCL), warned:  “Universities are increasingly nervous about doing anything that will create overt dissatisfaction among students because they are being told that student satisfaction is key.

She added: “The student satisfaction measure is fantastically dangerous. The way to make students happy is not asking them to do any work and giving them a high grade.

“This will reduce standards and undermine quality.  I just think this is totally mad, and destructive of everything universities stand for.”

The Higher Education and Research Bill, championed by Universities Minister Jo Johnson (below), will reach committee stage in the Lords on Monday, where is expected to be subject to a barrage of criticism.

As a gentle reminder to all those moribund Millennials, The Only Safe Space Is Your Home

No matter where you go in life, someone will be there to offend you. Maybe it’s a joke you overheard on vacation, a spat at the office, or a difference of opinion with someone in line at the grocery store. Inevitably, someone will offend you and your values. If you cannot handle that without losing control of your emotions and reverting back to your “safe space” away from the harmful words of others, then you’re best to just stay put at home. Remember, though: if people in the outside world scare you, people on the internet will downright terrify you. It’s probably best to just accept these harsh realities of life and go out into the world prepared to confront them wherever they may be waiting.

“Iron sharpeneth iron; so a man sharpeneth the countenance of his friend.” (Proverbs 27:17)

„Hear counsel, and receive instruction, that thou mayest be wise in thy latter end.” (Prov 19:20)