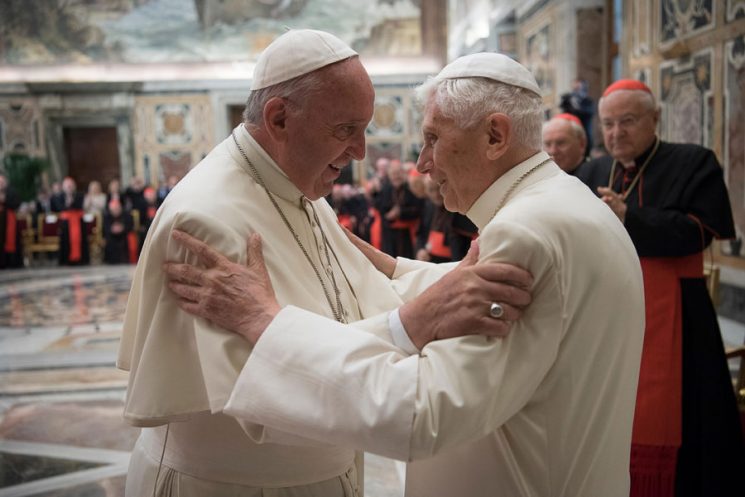 An interesting piece of news from the Italian Libero and The Times:

A group of cardinals who supported the election of Pope Francis are worried about his reforms and are planning to appeal to him to step down, a Vatican watcher claims, according to The Times.

“A large part of the cardinals who voted for him is very worried and the curia … that organised his election and has accompanied him thus far, without ever disassociating itself from him, is cultivating the idea of a moral suasion to convince him to retire,” Antonio Socci wrote in the Italian newspaper Libero.
The conservative Catholic journalist said that Pope Francis’s election had been backed by progressive German cardinals and a curia faction impatient with the rule of his predecessor, Pope Benedict XVI.
It was the latter faction who now believed that the Pope should resign and who would like to replace him with Cardinal Pietro Parolin, the Vatican secretary of state, Mr Socci said. He believed that the group numbered around a dozen, “but the importance of the members counts more than their number”.

“Four years after Benedict XVI’s renunciation and Bergoglio’s arrival on the scene, the situation of the Catholic Church has become explosive, perhaps really on the edge of a schism, which could be even more disastrous than Luther’s [who is today being rehabilitated by the Bergoglio church],” Socci wrote.
What was significant, he said, was that the doubters were not the conservative cardinals who had been in open opposition to the Pope since early in his reign.

Putting pressure on a pope to resign is a crime punishable under canon law, Socci added, so it was unclear how the moral suasion might be exercised. (source)

In light of the so called prophecies of Malachy, archbishop of Armagh, the name Pietro as a possible candidate for the next pope can be seen as an interesting item in the above summary, as the list of popes names Petrus Romanus as the last pope before the return of Jesus.

According to an account put forward in 1871 by Abbé Cucherat, Malachy was summoned to Rome in 1139 by Pope Innocent II to receive two wool palliums for the metropolitan sees of Armagh and Cashel. While in Rome, Malachy purportedly experienced a vision of future popes, which he recorded as a sequence of cryptic phrases. This manuscript was then deposited in the Vatican Secret Archives, and forgotten about until its rediscovery in 1590, supposedly just in time for a papal conclave ongoing at the time.