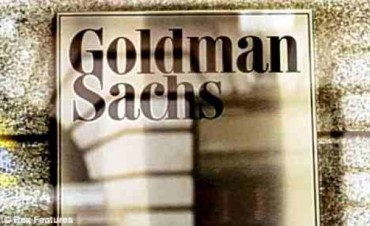 Goldman Sachs is doing it again.  Goldman is telling the public that everything is going to be just fine, but meanwhile they are advising their top clients to bet on a huge financial collapse.  On August 16th, a 54 page report authored by Goldman strategist Alan Brazil was distributed to institutional clients.  The general public was not intended to see this report.  Fortunately, some folks over at the Wall Street Journal got their hands on a copy and they have filled us in on some of the details.

It turns out that Goldman Sachs secretly believes that an economic collapse is coming, and they have some very interesting ideas about how to make money in the turbulent financial environment that we will soon be entering.  In the report, Brazil says that the U.S. debt problem cannot be solved with more debt, that the European sovereign debt crisis is going to get even worse and that there are large numbers of financial institutions in Europe that are on the verge of collapse.  If this is what people at the highest levels of the financial world are talking about, perhaps we should all start paying attention.

There is a tremendous amount of fear in the global financial community right now.  As I wrote about the other day, the financial world is about to hit the panic button.  Things could start falling apart at any time.  Most of these big banks will not admit how bad things are publicly, but privately there is a whole lot of freaking out going on.

According to the Wall Street Journal, Brazil believes that ?as much as $1 trillion in capital may be needed to shore up European banks; that small businesses in the U.S., a past driver of job production, are still languishing; and that China?s growth may not be sustainable.?

Perhaps most startling of all is what the report has to say about the debt problems of the United States and Europe.

For example, this following excerpt from the report sounds like it could have come straight from The Economic Collapse Blog?.

?Solving a debt problem with more debt has not solved the underlying problem. In the US, Treasury debt growth financed the US consumer but has not had enough of an impact on job growth. Can the US continue to depreciate the world?s base currency??

Remember, this statement was not written by some guy on the Internet.  A top Goldman Sachs analyst put it into a report for institutional investors.

The report also goes into great detail about the financial crisis in Europe.  Brazil writes about how the euro is headed for trouble and about how dozens of financial institutions in Europe could potentially be in danger of collapse.

But in any environment Goldman Sachs thinks that it can make money.  The following is how Business Insider summarized the advice that Brazil gave in the report regarding how to make money off of the impending collapse in Europe?.

This is so typical of Goldman Sachs.  They will say one thing publicly and then turn around and do the total opposite privately.

Sadly, the 54 page report mentioned above is right ? we really are facing aglobal debt meltdown and we really are heading for an economic collapse.

You aren?t going to hear the truth from the mainstream media or from our politicians because ?keeping people calm? is much more of a priority to them than telling the truth is.

But let there be no doubt ? it is coming.

The amazing prosperity that we have enjoyed for the last several decades has largely been a debt-fueled illusion.  It was a great party while it lasted, but now it is coming to an end and the aftermath of the coming crash is going to be absolutely horrific.

Keep watch and get prepared.  We don?t know exactly when the collapse is going to happen, but it is definitely on the way and now even Goldman Sachs is admitting that.

Even Goldman Sachs Secretly Believes That An Economic Collapse Is Coming
http://endtimeinfo.com/2011/09/even-goldman-sachs-secretly-believes-that-an-economic-collapse-is-coming/
central banksdebt crisisEU banksfinancial crash
Previous ArticleCartoons For Kids – Corrupting The Next GenerationNext Article12 Things That We Can Learn From Hurricane Irene