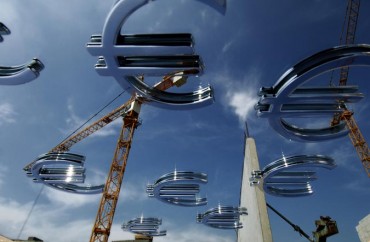 The financial crisis in Europe has become so severe that it has put the future of the euro, and indeed the future of the EU itself, in doubt. If the financial system in Europe collapses, it is going to plunge the entire globe into chaos. The EU has a larger economy and a larger population than the United States does. The EU also has more Fortune 500 companies that the United States does. If the financial system in Europe breaks down, we are all doomed. An economic collapse in Europe would unleash a financial tsunami that would sweep across the globe. As I wrote about yesterday, the nightmarish sovereign debt crisis in Europe could potentially bring about the end of the euro. The future of the monetary union in Europe is being questioned all over the continent. Without massive bailouts, there are at least 5 or 6 nations in Europe that will likely soon default. The political will for continued bailouts is rapidly failing in northern Europe, so something needs to be done quickly to avert disaster. Unfortunately, as anyone that has ever lived in Europe knows, things tend to move very, very slowly in Europe.

If the bailouts end and Europe is not able to come up with another plan before then, mass chaos is going to unleashed. Most major European banks are massively exposed to European sovereign debt, and most of them are also very, very highly leveraged. If we see nations such as Greece, Portugal and Italy start to default, we could have quite a few major European banks go down in rapid succession. That could be the “tipping point” that sets off mass financial panic around the globe.

Of course the governments of Europe would probably step in to bail out many of those banks, but when the U.S. did something similar back in 2008 that didn’t prevent the world from plunging into a horrible worldwide recession.

Right now, the way that the monetary union is structured in Europe simply does not work. Countries that are deep in debt have no flexibility in dealing with those debts, and citizens of wealthy countries such as Germany are becoming deeply resentful that they must keep shoveling money into the financial black holes of southern Europe.

These bailouts cannot go on indefinitely. Political and financial authorities all over Europe know this and they also know that Europe is rapidly heading toward a day of reckoning.

The quotes that you are about to read are absolutely shocking. In Europe they openly admit that the financial system is dying, that the euro is in danger of not surviving and that the EU does not work in its present form.

The following are 20 quotes from European leaders that prove that they know that the financial system in Europe is doomed….

#1 Polish finance minister Jacek Rostowski: “European elites, including German elites, must decide if they want the euro to survive – even at a high price – or not. If not, we should prepare for a controlled dismantling of the currency zone.”

#3 EU President Herman Van Rompuy: “The euro has never had the infrastructure that it requires.”

#4 German President Christian Wulff: “I regard the huge buy-up of bonds of individual states by the ECB as legally and politically questionable. Article 123 of the Treaty on the EU?s workings prohibits the ECB from directly purchasing debt instruments, in order to safeguard the central bank?s independence”

#5 Deutsche Bank CEO Josef Ackerman: “It is an open secret that numerous European banks would not survive having to revalue sovereign debt held on the banking book at market levels.”

#7 International Monetary Fund Managing Director Christine Lagarde: “Developments this summer have indicated we are in a dangerous new phase”

#8 Prince Hermann Otto zu Solms-Hohensolms-Lich, the Bundestag’s Deputy President: “We must consider whether it would not be better for the currency union and for Greece itself to go for debt restructuring and an exit from the euro”

#9 Alastair Newton, a strategist for Nomura Securities in London: “We believe that we are just about to enter a critical period for the eurozone and that the threat of some sort of break-up between now and year-end is greater than it has been at any time since the start of the crisis”

#10 Former German Chancellor Gerhard Schroeder: “The current crisis makes it relentlessly clear that we cannot have a common currency zone without a common fiscal, economic and social policy”

#11 Bank of England Governor Mervyn King: “Dealing with a banking crisis was difficult enough, but at least there were public-sector balance sheets on to which the problems could be moved. Once you move into sovereign debt, there is no answer; there’s no backstop.”

#12 George Soros: “We are on the verge of an economic collapse which starts, let’s say, in Greece. The financial system remains extremely vulnerable.”

#13 German Chancellor Angela Merkel: “The current crisis facing the euro is the biggest test Europe has faced for decades, even since the Treaty of Rome was signed in 1957.”

#14 Stephane Deo, Paul Donovan, and Larry Hatheway of Swiss banking giant UBS: “Member states would be economically better off if they had never joined. European monetary union was generally mis-sold to the population of the Europe.”

#15 Professor Giacomo Vaciago of Milan’s Catholic University: “It’s clear that the euro has virtually failed over the last ten years, even if you are not supposed to say that.”

#18 Deutsche Bank CEO Josef Ackerman: “All this reminds one of the autumn of 2008”

#19 International Monetary Fund Managing Director Christine Lagarde: “There has been a clear crisis of confidence that has seriously aggravated the situation. Measures need to be taken to ensure that this vicious circle is broken”

#20 German Chancellor Angela Merkel: “The euro is in danger … If we don’t deal with this danger, then the consequences for us in Europe are incalculable.”

Most of the individuals quoted above desperately want to save the euro. They are not going to go down without a fight. The overwhelming consensus among the political and financial elite in Europe is that increased European integration in Europe is the answer.

For example, EU President Herman Van Rompuy is very clear about what he believes the final result of this crisis will be….

“This crisis in the euro zone will strengthen European integration. That is my firm belief.”

Many of the elite in Europe are now openly talking about the need for a “United States of Europe”. Just consider what former German chancellor Gerhard Schroeder recently had to say….

“From the European Commission, we should make a government which would be supervised by the European Parliament. And that means the United States of Europe.”

But as mentioned above, things in Europe tend to move very, very slowly. The debt crisis in Europe is rapidly coming to a breaking point, and it is very doubtful that Europe will be able to move fast enough to head it off.

What we may actually see is at least a partial collapse of the euro and a massive financial crisis in Europe first, and then much deeper European integration being sold by authorities in Europe as “the solution” to the crisis.

This would be yet another example of the classic problem/reaction/solution paradigm.

The “problem” would be a horrible financial crisis and economic downturn in Europe.

The “reaction” would be a cry from the European public for someone to “fix” things and return things back to “normal”.

The “solution” would be a “United States of Europe” with much deeper economic and political integration which is something that many among the political and financial elite of Europe have wanted for a long, long time.

Right now, the people of Europe are very much opposed to deeper economic and political integration. For example, 76 percent of Germans says that they have little or no faith in the euro and one recent poll found that German voters are against the introduction of “Eurobonds” by about a 5 to 1 margin.

It looks like it may take a major crisis in order to get the people of Europe to change their minds.

Unfortunately, it looks like that may be exactly what is going to happen.

?The European Financial System Is Finished? In Quotes
http://endtimeinfo.com/2011/09/the-european-financial-system-is-finished-in-quotes/
EUEuroEurobondEuropean Unioneurozone
Previous ArticleAnger in Australia as school books ?write Christ out of history?Next ArticleSOROS: Eurozone Crisis Could Be Worse Than Lehman