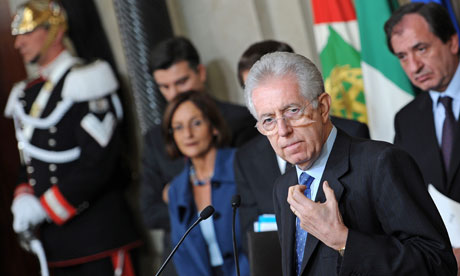 Via The New American

Italy?s new Prime Minister Mario Monti, who rose to power in what critics called a ?coup d?etat,? is a prominent member of the world elite in the truest sense of the term. In fact, he is a leader in at least two of the most influential cabals in existence today: the secretive Bilderberg Group and David Rockefeller?s Trilateral Commission.

Nicknamed ?Super Mario,? Monti is also an ?international advisor? to the infamous Goldman Sachs, one of the most powerful financial firms in the world. Critics refer to the giant bank as the ?Vampire Squid? after a journalist famously used the term in a hit piece. But its tentacles truly do reach into the highest levels of governments worldwide.

Following the Italian government?s descent into the economic abyss that saw bond yields soar to record highs as the euro-zone began to come apart at the seams, ex-Prime Minister Silvio Berlusconi decided to step down. And late last week, President Giorgio Napolitano asked Monti to form a new government.

On November 16, the new Prime Minister ? who will also serve as Italy?s ?Economy Minister? ? announced that he was appointing an array of bankers, technocrats, and lawyers to lead the emerging government. After unveiling proposed reforms later this week Monti and his unelected team will face Parliament in a confidence vote.

Some of the nation?s political parties have already said they support the new leadership. But others, including loyal members of Berlusconi?s party, complained of a ?coup d?etat? engineered by bankers and the European Union.

?The truth is that there was a big operation, an ?Italian Job,? to get Berlusconi out of the way by forcing him to resign,? complained former Interior Minister Roberto Maroni, comparing Berlusconi?s ouster to the movie of that same name made in1969 and remade in 2003. While the ex-Prime Minister was not technically forced to resign, he said it was an act of ?responsibility.?

Listed as a member of the ?steering committee? on the official Bilderberg website, critics say Monti has ?establishment? written all over him. The shadowy group he helps lead includes a roster of the world?s real power brokers ? media magnates, royalty, military leaders, big bankers, heads of state and government, key CEOs, and more.

The elite members gather once a year in total secrecy, sparking innumerable theories and widespread concern. In 2011 the group met in Switzerland and attracted more scrutiny than in the past.

But despite the attendance of influential reporters, editors, and media power houses, very little of substance was publicly revealed. It is known, however, that Bilderberg played a crucial role in erecting the increasingly powerful supranational regime in Brussels.

Monti is also the European Group chairman of the infamous Trilateral Commission, according to the organization?s website. The secretive group, which also lists among its members some of the most influential members of the world elite, was supposedly founded to bring about closer ?cooperation? between North America, Europe, and Japan.

The Commission was founded in 1973 by the infamous banker and power-broker David Rockefeller. “Some even believe we are part of a secret cabal working against the best interests of the United States, characterizing my family and me as ‘internationalists’ and of conspiring with others around the world to build a more integrated global political and economic structure ? one world, if you will,? Rockefeller wrote in his 2002 autobiography. ?If that’s the charge, I stand guilty, and I am proud of it.?

Monti is also a prominent leader of more than few smaller ?think tanks? promoting more ?integration,? big government, and globalism. He has been a long-time and consistent supporter of an ?economic government? for the EU, as well as more Brussels meddling in social policies.

His career has included academia, politics, banking, and more. And he has held several prominent positions within the European Union apparatus including the job of European Commissioner for Internal Market, Financial Services, Financial Integration, and Taxation.

“I would like to confirm my absolute serenity and conviction in the capacity of our country to overcome this difficult phase,” Monti proclaimed recently. And he will have plenty of help.

The European Central Bank has started to do everything possible to rescue the profligate Italian government – albeit quietly. According to Bloomberg, the ECB began buying up huge quantities and sizes of the regime?s bonds this week.

?There are no real buyers,? European interest-rate strategy chief Mohit Kumar with Deutsche Bank told the news service. Analysts suspected that the ECB move was designed to bolster confidence in the new Italian government and its leader.

Monti?s first task will be to satisfy EU rulers by imposing massive new taxes on the Italian people. Tough ?austerity? measures will follow soon after that. He said more growth ? a tough task with new and higher taxes ? will be his priority.

“I hope that, governing well, we can make a contribution to the calming and the cohesion of the political forces,” Monti explained after meeting with union bosses.

The Italian government is currently drowning in trillions of euros worth of debt ? well over 100 percent of GDP. And the market seems largely unwilling to loan it more money without EU prodding, guarantees, and huge yields.

EU and euro-zone advocates are doing everything possible to avoid a calamity that could bring down their precious supranational government and its regional currency. But Italy, as the third-largest euro-zone economy, is simply too big to bail out, according to experts ? even with the emerging ?dictatorship? mechanism designed to save bankrupt governments and banks using taxpayer money.

Monti could have until 2013 ? the next scheduled election ? to implement his ?reforms,? assuming he gets his way. Critics, however, are calling for new elections to be held as soon as possible.