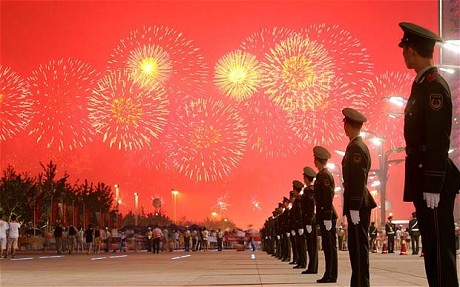 U.S. ambassador: Political situation in China “very, very delicate” … The Chinese people are increasingly frustrated with the Chinese Communist Party and the political situation in China is “very, very delicate,” U.S. Ambassador to China Gary Locke said on Wednesday. “I do believe that there is a power of the people, and there is a growing frustration among the people over the operations of government, corruption, lack of transparency, and issues that affect the Chinese people on a daily basis that they feel are being neglected,” Locke told NPR’s Steve Inskeep during a Wednesday interview, part of a media blitz Locke is conducting during his visit to Washington. ? Foreign Policy 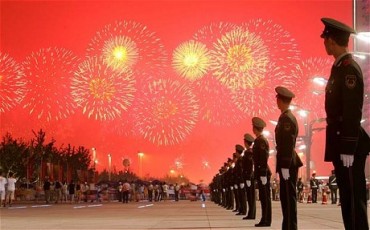 Dominant Social Theme: China is delicate? Well … it seems like a success to us!

Free-Market Analysis: After writing many articles in the past few years ? long before it was fashionable even among alternative news services ? explaining that the ChiComs were on the proverbial thin ice with their huge 1.4 billion population, we find this weird article explaining that China is about to tip over into outright rebellion.

Even stranger, it appears on the Drudge Report, which is read by millions. Foreign Policy magazine is an elite mouthpiece and the Drudge Report, as good as it is, would not be tolerated (given its size) by US intel if it did not toe SOME line or other. You won’t find a lot of articles on Drudge questioning the “official” story of 9/11, for instance.

So perhaps the powers-that-be are coming to the conclusion that the Chinese Miracle is indeed an unsustainable one. And that people ought to know about it. It doesn’t add much to the credibility of an already maligned mainstream press to be blindsided by the collapse of the world’s biggest country, after all.

And China will collapse, no doubt. Whether there is an economic collapse, a political collapse or simply a general deflation of its power centers, the Chinese people are surely on the brink of a new era. Of course, we also have to note that “brink” is a fungible term. Collapse could come tomorrow or a decade from now or even longer.

But the reason we’ve been predicting a collapse of some sort or other is because the ChiComs cannot justify their rule anymore. They cannot justify it on moral, economic or military grounds. They are in power because of a kind of unspoken deal. And when the economy becomes shaky, as it has now started to become, the deal is called into question, too.

It was a desperate gambit to begin with, the idea that the ChiComs would keep power based on moving their model toward capitalism. It struck at the heart of the reason for ChiCom power. With the seeming success of the capitalist model, there is no justification for ChiCom rule. They must have known that. But they did what they needed to retain power.

We’ve reported on THAT too, of course. We have explained the three-strikes-yer-out rule on numerous occasions. First there was the great leap forward that outright starved 50 million Chinese. Then there was Tiananmen Square that showed quite clearly the determination of the old men of the Party to hold onto power.

Finally, there was the ongoing “Chinese Miracle.” Gradually, and then with increasing fervency, the lower reaches of the Chinese economy were released from the iron grip of wage and price control. Over time other parts of the economy were reconfigured as well.

China became synonymous with “free markets” of a sort. China, we were told, was leading the way to prosperity and freedom and would be the driving force of the 21st century. The West learned that the driving force of Chinese success, its combination of authoritarianism and commerce, was far more powerful than the West’s model of outright freedom.

Of course, the West wasn’t free and the ChiCom “model” was based on central banking stimulation that has rocketed the country into the stratosphere. The entire nation is so juiced on money-from-nothing that entire EMPTY cities are dotting the landscape.

Meanwhile, the oppression goes on. The Chinese are so desperate to invest their mirage-like wealth into something that they have taken to buying two or three empty properties in increasingly mold-ridden vacant cities. This occurs even as the Chinese government shuts down gold bourses to make sure that money cannot flow into silver or gold.

Stand back and look at the Chinese economy objectively and you see an environment where the government itself is evidently in charge of most if not all of the big banking and industrial establishments behind the scenes. It’s really not much different, in some ways, than the old Soviet Union.

What difference there is, in our view, has to do with central banking. The Anglosphere power elite evidently and obviously planned on using China as an example of how to run a successful authoritarian economy. They apparently prevailed on the old men of the Party to open the monetary taps.

This has certainly worked, but the hitch is that sooner or later monetary stimulation doesn’t work. It’s an iron law. You don’t get something for nothing. You want free money? Well, be prepared to experience a high degree of price inflation.

And that’s what the average Chinaman got stuck with. Real estate prices have pushed up 40 percent or more and food prices as well. That’s just what’s being reported. The reality is probably a lot worse. As is the corruption. The Communist Party remains in charge of a huge, even red-hot, economy.

The abuses, payoffs and other kinds of chicanery going on now must be evident at every level to average Chinese. Increasingly, as prices go up, as rates are raised, choking off employment, as factories close because of lack of Western demand, the “deal” is coming undone.

Through its AYM program, the US State Department has evidently and obviously helped destabilize a slew of secular regimes in the Middle East. Tunisia, Egypt, Syria and Libya have all received the “treatment.” It always begins with the idea that the “people” are rebelling. [The Alliance of Youth Movements and its subsidiary, Movements.org, are US-sponsored entities that are dedicated to the overthrow of existing regimes around the world. Through conferences, events, and training, AYM seeks to create the conditions for revolution in various countries. Movements.org, is a website that allows information sharing as regards these movements.]

In this case, they probably are. But we wouldn’t put it past the Anglosphere power elite to take advantage of the current Chinese unrest to build it into something more. Does the power elite banking axis of the City of London,Washington DC, the Vatican and Tel Aviv have the chutzpah to foment outright rebellion in China? Well … they’ve done it before.

Countries, people, civilizations … These are mere playthings to the small group of central banking families that we call the Anglosphere elite. For centuries, so far as we can tell, they’ve straddled the world and attempted to impose their vision upon it as best they can.

One can see the rising desperation in the way that the elites are maneuvering to pass authoritarian measures in legislatures around the world, adding “security” layers to international travel and fomenting “wars on terror” with the least provocation.

The elites and the ChiComs are closely allied at this point. The ChiComs own trillions in Western debt and the trade between Europe, America and China keeps the world running. But the Anglosphere elites in our view are also wedded to creating a massive, worldwide depression in order to usher in true world government.

So this is the question we need to resolve. Will an almost inevitable Chinese economic debacle usher in a new wave of freedom in that country or will it merely exacerbate the authoritarian trends now taking place? Will the Anglosphere be able to control a “new” Chinese revolution ? or will it spin out of control as it appears to be doing in Europe, and eventually (we believe) in the US?

Like the Gutenberg Press before it, the Internet is causing great changes in the way people look at the world and relate to each other. The elite’s dominant social themes ? the fear-based promotions that they used to control middle classes with in the 20th century ? are no longer working so well.

The elites evidently and obviously have turned to more authoritarian and military measures to hold onto power and to realize global government. But if one looks at the chaotic times post-Gutenberg, one is struck by the freedoms that flowered and the partial obliteration of the old order.

The elites of the day turned to numerous false-flag gambits to hold onto power and to influence regimes but it was not seemingly until the 20th century that their grip was secured again. And now once more it seems to be coming undone.

We don’t know what will happen in China. But we do know the “Chinese Miracle” is an unstable one and that the Internet itself in China, as elsewhere, is apparently helping to destabilize the regime by making (truthful) information available that would not otherwise be accessible. This is doubtless happening despite the ChiComs’ best efforts to stop it.

If the US State Department itself has determined that China’s instability is irreparable and that the best that can be hoped for is to encourage a revolution and get ahead of it, then the world is surely in for a bumpy ride.

We would also offer the hypothesis that no matter what the powers-that-be do now, they will have a hard time ameliorating the effects of the Internet Reformation. So far, they’ve apparently utilized the destabilization creatively but over time that is a dangerous game. If China goes, we wonder if in some sense the US will be next.

The Internet, after all, is a process not an episode. And the elites, despite their many false-flag gambits, wars and torrents of legislation, have not been able to slow it down very much, if at all, in our view.

At the heart of the Internet Reformation is increased knowledge about the Way the World Really Works. This cannot be legislated away. It cannot be wiped away by wars. It cannot even be much reduced by the deliberate implementation of poverty.

Conclusion: The human hive mind has apparently gone to work, using a new technology, as humans are prone to do. It is instinct that is driving the outcome. And instinct is something even the power elite have not yet figured out how to circumvent.