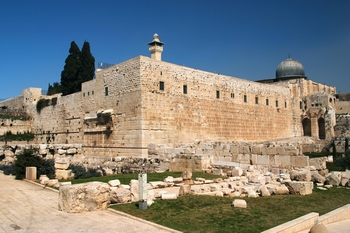 According to Bible prophecy, the event that will clearly mark the start of the Antichrist?s seven-year reign is the signing of a pact or ?covenant?: ?He [the Antichrist] shall confirm a covenant with many for one week [seven years]? (Daniel 9:27a). Because the pact is called a ?holy covenant? in Daniel 11:28-30, it appears to have something to do with religion or religious rights.

One widely held view is that the covenant will, in part, make it possible for the Jews to rebuild their Temple on Mount Moriah in Jerusalem. The rebuilding of the Temple is an important Endtime event because it is crucial to the fulfillment of other key Bible prophecies, some of which also involve the ancient Jewish practice of blood offerings, which can only be carried out in the Temple in Jerusalem. (Blood offerings ceased in 70 AD, when the Romans razed the last Temple.)

There is now a drive in Israel and among Jews worldwide, spearheaded by the Temple Institute situated in Old Jerusalem, to rebuild the Temple as illustrated by the article bellow.

In a recent documentary a leading rabbi in Jerusalem says that he believes the next Jewish temple will be rebuilt on the Temple Mount in his lifetime and he says everything is ready to build that temple today.

Rabbi Nachman Kahane, the rabbi who has guided many Jewish students of the Scriptures on the subject of the temple has been the main source of serious study and preparations to build the Jewish temple basically because that is what the Bible calls for from the religious Jews.

In Rabbi Kahane’s Yeshiva, which is a place of learning for Jewish young men, the rabbi trained all the leaders of this effort to rebuild the temple in Jerusalem and it was his students that started the Temple Institute who has accumulated all the implements for the next temple and train the men to operate that temple.

Now twenty years later the rabbi believes that the temple will indeed be rebuilt in his lifetime. That is a quote from the rabbi on a documentary released on the subject that shows the rabbi plus many others who also agree that the temple could be standing in Jerusalem in the very near future.

Rabbi Yehuda Glick, the former head of the Temple Institute, says even the priestly garments are ready and the temple will stand in full operation very soon. Rabbi Chaim Richman, who is the leading authority on the red heifer, says the temple will be built at the spot of the original site of the Garden of Eden which he says is the Temple Mount in Jerusalem.

Rabbi Yoel Keren says that there will be a Jewish temple in Jerusalem that follows the details in Ezekiel 40-46 but first the Jewish people will build a less extravagant temple as they did when the Second Temple was rebuilt 2500 years ago. The priests have been trained, the implements made to operate the temple, even the Menorah, the seven branched candelabra, and there are ten stringed harps for the Levites to play as called for by King David in I Chronicles 23:5.