Reports from mission organizations around the world tell us that millions of Christians are being persecuted for their faith, with more than 7,000 having been murdered just within the last year. However, few in the West are hearing about it as the media ignores the growing threat that Christians face.

Highlights were as follows:

– North Korea has been named the most dangerous place in the world to be a Christian for the 14th year running.

– Iraq has replaced Somalia as the second most dangerous place to be a Christian.

– Eritrea, now nicknamed the ‘North Korea of Africa’ due to high levels of dictatorial paranoia, follows at number three.

– Afghanistan, Syria and Pakistan, in that order, comprise the next three most difficult places for Christians.

– Somalia, Sudan, Iran, and Libya make up the final four of the top ten countries in that order.

– India, the second most populous country in the world, has seen persecution levels rise dramatically for the third straight year, rising to number 17 from a ranking of 31 in 2013.

Lisa Pearce, CEO of Open Doors UK & Ireland, said: “This is a cause of great concern. Many countries have dropped down the list, not because persecution there is decreasing, but simply because others are getting worse faster.”

Pearce added with a mixture of concern and hope: “The persecution of Christians is getting worse, in every region in which we work – and it’s getting worse fast. In many parts of the world, despite the pressure and the often terrible cost, the church continues to grow. There is always hope, and yet we are in unmarked territory – the pace and scale of persecution of Christians is unprecedented and growing fast.” 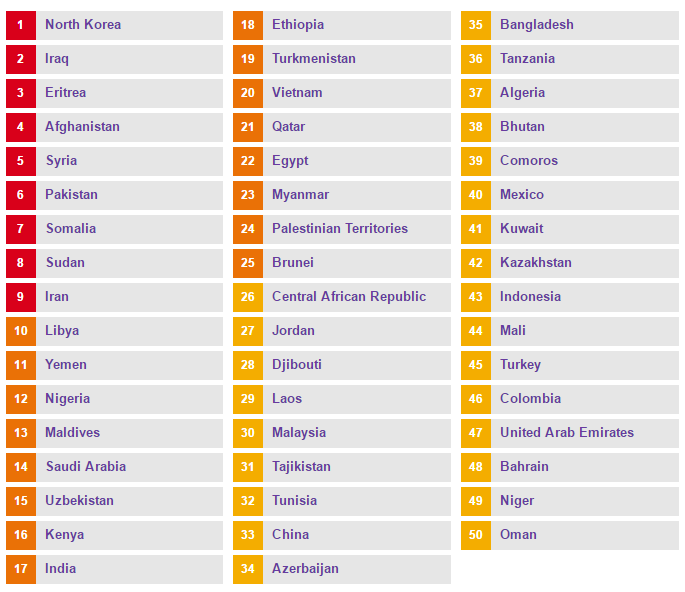 Indications are that, by geographical spread, most of these deaths and persecutions are carried out by Muslims. Christian charity Open Doors, (separately described a humanitarian relief organization that specializes in helping Christians who are persecuted worldwide), compiled the list.

The organization said extreme Islamic fundamentalism is rising most sharply in sub-Saharan Africa, where more people are killed for their Christian faith than anywhere else in the world.

From an individual country perspective, North Korea is by far the biggest culprit and antagonist against the Gospel of Jesus Christ and Christians. Mansfield noted that in North Korea it is estimated 70,000 Christians are currently in prison or labor camps because of their faith- which is illegal under Kim Jong-un’s regime. Christians are forced to worship in secret and risk torture and death to do so.

Iraq has been named the second most dangerous place in the world to be a Christian where the church is on the brink of being wiped out. Christians have been increasingly persecuted by Islamic extremists.

The Christian population or Iraq has been decimated from two million in 2003 to less than 200,000 today. Thousands were forced from their homes when Islamic State (ISIS) terrorists captured large swathes of territory. Christians in Iraq face abduction, sexual abuse and death threats at the hands of the extremists.

In Syria, Christians have been targeted by crazed jihadis as well as being caught up in the ongoing civil war. With an estimated 772,000 Christians, it is forbidden to be a Christian in ISIS- controlled areas. In areas outside of ISIS control, it is illegal for people to convert from Islam. Christian villages have been attacked by ISIS terrorists and it is estimated 3,000 Christians were forced to leave their homes in February 2015 alone and hostages were executed.

In recognition of the scale and ferocity of these persecutions, a petition with more than 400,000 signatures has been submitted to the UN calling for the Security Council to formally declare the persecution of Christians in Iraq and Syria as genocide.

In a separate report by Hollie McKay published in FoxNews.com, only a handful of mostly sick or elderly Christians remain in the ISIS stronghold of Raqqa, and Syrian Christians fear the forces that have brought that city’s population of Gospel followers to the brink of extinction could do the same for the entire nation.

An estimated dozen Christian families are still in the northern city, forced under threat of execution to convert, pay an “infidel” tax or go into hiding. Forbidden from leaving, they are also in danger of dying from attacks directed at ISIS by Damascus, Russia, and the U.S.-led Western coalition.

“We are trying to help them escape or stay safe, in hiding,” said Ayman Abdel Nour, executive director of Syrian Christians for Peace. “Their life is horrible. The people of Raqqa are being forced to live like it was 1,400 years ago.”

The Rev. Ibrahim Nseir, pastor of the National Evangelical Synod of Syria and Lebanon and the Presbyterian Church in Aleppo, told FoxNews.com from the conflict-torn city:  “We are facing terrorist action in the whole geography of Syria…They are destroying our churches, killing and kidnapping Christians, stealing our homes and our businesses.”

In Eritrea, believers have been imprisoned in metal shipping containers in scorching temperatures and forced to work long hours of manual labor.

In Afghanistan, it is believed there are just a few thousand Christians, as those converting from Islam risk arrest. Buildings used as underground churches have been attacked and ex-pat Christians have been killed.

Based on these reports, it would seem that Christians within the West are much safer. Not quite – as a recent reminder by Chris Tomlinson for breitbart.com would indicate. Tomlinson’s report makes reference to a new study showing that potentially thousands of Christians have been attacked and harassed in German migrant homes by Muslim guards and fellow migrants.

Markus Rode, a member of Open Doors said that the study is only “the tip of the iceberg” and called for more action to address the problem, Frankfurter Allgemeine reported. Volker Baumann of Action for Persecuted Christians (AVC) claimed that up to 40,000 Christians are being persecuted for their faith in Germany according to the group’s research.

Baumann joined Rode and several others who represent Christian charities at a press conference where they recommended that the German government house Christians in separate homes, increase the number of non-Muslim security guards, and reach out to Christian migrants who may not report incidents of abuse for fear of reprisal from Muslims in their asylum homes.

It’s not just in Germany either. According to Breitbart London reports, Christian refugees now in European asylum homes are finding more and more that they are in as much danger from radical Muslims in Europe as they were in their home countries. Most attacks include verbal insults, physical assaults and death threats against themselves and family members.

The perpetrators of most of the attacks were fellow migrants who look down on converts and believe them to be apostates. More interesting was the prevalence of Muslim security guards who participated in the attacks.

Almost half of those surveyed said they had received abuse from security guards and in the German capital of Berlin the figure rose to two-thirds. Many of the security guards hired to keep order and protect migrants regularly come from migrant backgrounds themselves and even more often have no qualifications.

In Berlin, Christian refugees were threatened after they refused to take part in Islamic prayers with Muslims from Iran and Afghanistan.  About 80% of refugees surveyed say there’s a need for separate accommodation for Christians and Muslims. Others say seminars should be held for all refugees on German law, rights and the freedom of religion.

Such arguments, of course, are purely academic where the invaders do not recognize the rule of law, refuse to assimilate into the culture, and there is no enforcement of the law by the host country.

Perhaps there has never been a greater time or need for support of Christians under persecution throughout the world. The prayers, giving and encouragement from Christian organizations and individuals towards alleviating the sufferings of their fellow brothers and sisters in Christ remains critical.

The forces of Satan and darkness are hard at work to steal, kill and destroy in these last days with the prime target being true believers in Jesus Christ.

However, the words of Jesus still ring true today, more than ever before regarding His church: “…the gates of Hell shall not prevail against it”. (Matthew 16:18b).