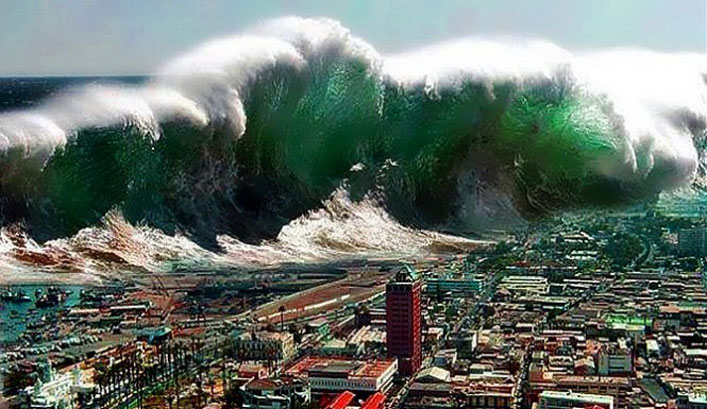 As seen in the MSM video clip below, Shep Smith informs the public that scientists agree that the “worst natural disaster in the history of the nation” is overdue and is coming.

The original article Smith reports on is at The New Yorker Magazine, which describes what scientists and FEMA are all preparing for, which is a “full-margin rupture, the magnitude will be somewhere between 8.7 and 9.2, followed by a Tsunami.

Via The New Yorker:

By the time the shaking has ceased and the tsunami has receded, the region will be unrecognizable. Kenneth Murphy, who directs FEMA?s Region X, the division responsible for Oregon, Washington, Idaho, and Alaska, says, ?Our operating assumption is that everything west of Interstate 5 will be toast.?

In the Pacific Northwest, everything west of Interstate 5 covers some hundred and forty thousand square miles, including Seattle, Tacoma, Portland, Eugene, Salem (the capital city of Oregon), Olympia (the capital of Washington), and some seven million people. When the next full-margin rupture happens, that region will suffer the worst natural disaster in the history of North America. Roughly three thousand people died in San Francisco?s 1906 earthquake. Almost two thousand died in Hurricane Katrina. Almost three hundred died in Hurricane Sandy. FEMA projects that nearly thirteen thousand people will die in the Cascadia earthquake and tsunami. Another twenty-seven thousand will be injured, and the agency expects that it will need to provide shelter for a million displaced people, and food and water for another two and a half million. ?This is one time that I?m hoping all the science is wrong, and it won?t happen for another thousand years,? Murphy says.

The entire article is worth the time it takes to read, but some main quotes related to FEMA projections are highlighted below:

? FEMA expects to coordinate search-and-rescue operations across a hundred thousand square miles and in the waters off four hundred and fifty-three miles of coastline. As for casualties: the figures I cited earlier?twenty-seven thousand injured, almost thirteen thousand dead?are based on the agency?s official planning scenario, which has the earthquake striking at 9:41 A.M. on February 6th. If, instead, it strikes in the summer, when the beaches are full, those numbers could be off by a horrifying margin.

? How much all this will cost is anyone?s guess; FEMA puts every number on its relief-and-recovery plan except a price. But whatever the ultimate figure?and even though U.S. taxpayers will cover seventy-five to a hundred per cent of the damage, as happens in declared disasters?the economy of the Pacific Northwest will collapse. Crippled by a lack of basic services, businesses will fail or move away. Many residents will flee as well. OSSPAC predicts a mass-displacement event and a long-term population downturn.

? FEMA calculates that, across the region, something on the order of a million buildings?more than three thousand of them schools?will collapse or be compromised in the earthquake. So will half of all highway bridges, fifteen of the seventeen bridges spanning Portland?s two rivers, and two-thirds of railways and airports; also, one-third of all fire stations, half of all police stations, and two-thirds of all hospitals.

WHICH brings us to an alert seen at Steve Quayle’s website in his SQ Alert section from July 17, 2015, which details a phone call received from a FEMA meeting attendee, someone generally not known as a “conspiracy theorist” and who considers them to be “nutjobs”……. at least he did until he attended the latest meeting.

There is going to be an ‘Event’ within the next 6 months. -The nature of the ?Event’ is believed to be a Natural Disaster, such as a Solar Flare, but could be something else

I have a longtime friend, who is in law enforcement in one of the

Jade Helm states. He is totally logical and factual (sheeple) while I think
more out of the box. I have tried to help him see what?s going on, but he always
calls me a nutjob with too much time on my hands. I just got a phone call from him, he has been attending FEMA Training, and he is now having a meltdown after what they learned.

-There is going to be an “Event” within the next 6 months.

-The nature of the “Event” is believed to be a Natural Disaster, such as a Solar Flare, but could be something else.

-The “Event” will be so catastrophic it will have a severe effect on our fragile economic infrastructure, so an interm bank holiday will be declared.

–Social unrest and violence is expected due to the stores being emptied of food and other supplies, early after the event. So martial law is expected to be declared.

-The “Event” is expected to make normal governing of the country extremely difficult if not impossible, so FEMA will be assuming continuity of government.

-All involved and support personnel are required to maintain a supply of cash at home for emergencies, and a minimum of three days of food and water for each member of their families. This is not to get them through disaster, but to tide them over until FEMA can establish their Aid Camps.

Is FEMA preparing for the “event” the scientists, researchers and FEMA representatives talk about in The New Yorker or are they actively preparing for something else?

We all know the government has been preparing for “something.” We also know that multiple military training exercises that have occurred and are occurring right now, including Jade Helm which has been described by veterans as “unprecedented”, has military assets prepositioned across the country already.

Could this be the reason for it all?

Scientists Warn Of \'Worst Natural Disaster in History of Nation\'
http://endtimeinfo.com/2015/07/scientists-warn-of-worst-natural-disaster-in-history-of-nation/
CascadiaearthquakeFEMAsigns of the timestsunami
Previous ArticleObama to Back Palestinian State at Security CouncilNext ArticleThe People ?Possessed? by Computers