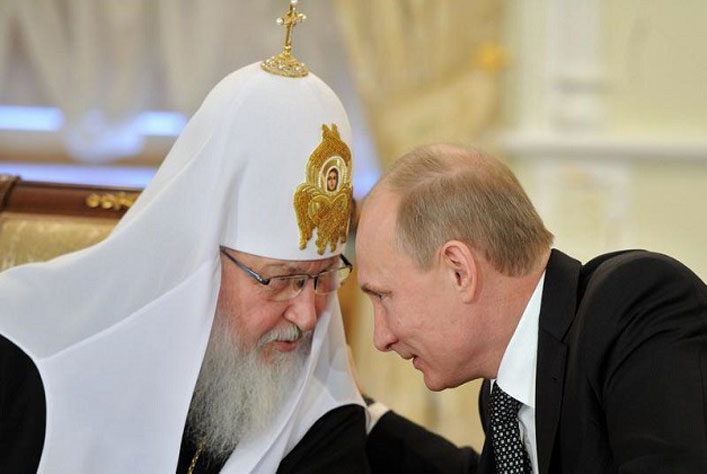 The Russian Orthodox Church is lending their support to Vladamir Putin?s ground and air campaign in Syria as a ?holy war,? echoing the refrain of bygone centuries in Christendom.

?The fight with terrorism is a holy battle and today our country is perhaps the most active force in the world fighting it,?

While many in the U.S. are wary of Putin?s actions in Syria, Iran and Iraq, he seems to have a loyal ally in the Russian Church.

?The Russian Federation has made a responsible decision on the use of armed forces to defend the people of Syria from the sorrows caused by the arbitrariness of terrorists,? Chaplin continued.

In 2012, the Russian church brought to Putin?s attention the rising tide of persecution against Christians under Islam, according to Frontpage magazine.

A high official in the church told Putin that every five minutes one Christian was dying for his or her faith in some part of the world. The cleric asked Putin to make the protection of Christians one of his foreign policy priorities in the future.

?This is how it will be, have no doubt,? Putin told the church official, according to Frontpagemagazine.

Russian Patriarch Kirill reportedly wrote a letter to President Obama, asking him to stop empowering those persecuting Christians. ?I am deeply convinced that the countries which belong to the Christian civilization bear a special responsibility for the fate of Christians in the Middle East,? he wrote, according to Frontpage.

Ironically, Putin has assumed a position as a modern-day crusader, portraying Russia as the last defender of the Christian faith.?

This stands as a breathtaking contrast to the godless communist system that produced Putin, while many in the U.S. have ceased to view their country as having a Christian identity.

?We must protect Russia from that which has destroyed American society,?

?What Russia is doing may save the lives of Christians in the Middle East?. You understand that the Syrian government ? has protected Christians, they have protected minorities from the Islamists.?

Graham foresees a horrible ?bloodbath of Christians? in Syria, if the Jihadists gain control.

?The outcome of ousting the secular strongman of Syria will be more atrocities, more Christian persecution, more rapes and enslavement, and more bombed churches and destroyed antiquities,? wrote Raymond Ibrahim in Frontpage magazine. Despite the administration?s assurances of a ?pluralistic? Syria once Assad is gone, it will lead to more terrorism for the West, he noted.