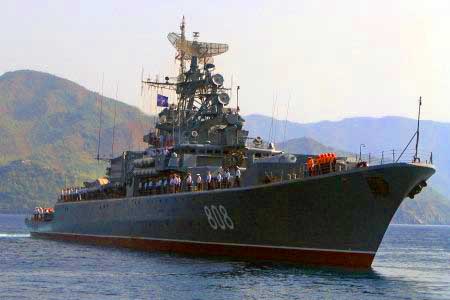 Moscow in aggressive move to stop another ?humanitarian intervention?

Russian warships have entered Syrian territorial waters in an aggressive move designed to prevent any NATO-led attack on the country under the guise of a ?humanitarian intervention?.

?Russian warships are due to arrive at Syrian territorial waters, a Syrian news agency said on Thursday, indicating that the move represented a clear message to the West that Moscow would resist any foreign intervention in the country?s civil unrest,? reports Haaretz.

Russia has stepped up efforts to defend Syria in recent days, with Foreign Minister Sergei Lavrov keen to frame the violence in the country as a civil war in defiance of claims by western powers that President Bashar al-Assad has overseen a bloody crackdown on innocent protesters.

As we saw prior to the attack on Libya, which was also framed as a ?humanitarian intervention,? NATO powers are keen to demonize Assad?s government by characterizing attacks by his forces as atrocities while largely ignoring similar attacks by opposition forces, such as this week?s raid on a Syrian air force intelligence complex that killed or wounded 20 security police.

U.S. State Department spokesman Mark Toner rejects Russia?s claim that Syria is in a civil war, stating, ?We believe it?s very much the Assad regime carrying out a campaign of violence, intimidation, and repression against innocent protesters.?

Of course, we heard similar rhetoric even as NATO-backed Al-Qaeda rebels were commandeering fighter jets and firing rocket-propelled grenades in Libya, actions also undertaken by ?innocent protesters,? we were told at the time.

As we have previously reported, despite overwhelming speculation that Iran will be the next target of a military assault, Syria is the likeliest target for the next salvo of NATO-backed regime change.

US President Barack Obama got the ball rolling back in August when he called on President al-Assad to step down. The UN has already withdrawn all non-essential staff from the country.

Without Russia?s help, Syria would be largely defenseless against a NATO attack. ?I don?t see any purely military problems. Syria has no defence against Western systems ? [But] it would be more risky than Libya. It would be a heavy military operation,? former French air force chief Jean Rannou commented.

Given that the western press has proven adept at manufacturing lies to justify military interventions, whether the actions of Assad?s regime represent genuine atrocities or legitimate conduct in the midst of a civil war remains unclear. Some have claimed the abuses are being embellished, while both former CIA agent Robert Baer and ex-MI6 officer Alastair Crooke point out that the Syrian people definitely want change, but not in the form of a NATO ?humanitarian? assault.