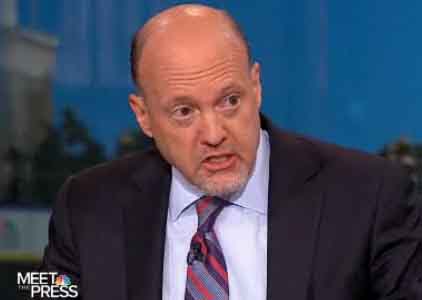 When the crash happens, it could be the ideal opportunity for the coming Antichrist world government to take power. The world will be in such dire financial straits that they will welcome the Antichrist rule and hail him as a hero, since he will cunningly persuade the nations to cooperate with his plan for solving the economic situation (Daniel 11:21,24). – Joseph Candel 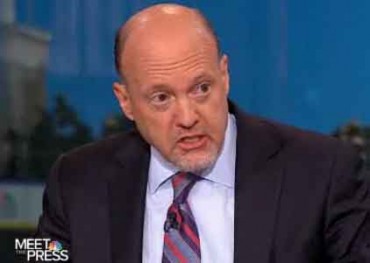 During an appearance on Meet The Press on Sunday, Jim Cramer of CNBC boldly predicted that “financial anarchy” is coming to Europe and that there will be “bank runs” in Spain and Italy in the next few weeks.  This is very strong language for the most famous personality on the most watched financial news channel in the United States to be using.  In fact, if Cramer is not careful, people will start accusing him of sounding just like The Economic Collapse Blog.  It may not happen in “the next few weeks”, but the truth is that the European banking system is in a massive amount of trouble and if Greece does leave the euro it is going to cause a tremendous loss of confidence in banks in countries such as Spain, Italy and Portugal.  There are already rumors that the “smart money” is pulling out of Spanish and Italian banks.  So could we see some of these banks collapse?  Would they get bailed out if they do collapse?  It is so hard to predict exactly how “financial anarchy” will play out, but it is becoming increasingly clear that the European financial system is heading for a massive amount of pain.

But what is Europe supposed to do?  Even though “austerity measures” have been implemented in many eurozone nations, the truth is that they are all still running up more debt.  Are European nations just supposed to run up massive amounts of debt indefinitely and pretend that there will never been any consequences?

That is apparently what Barack Obama wants.  During the G-8 summit that just concluded, Obama urged European leaders to pursue a “pro-growth” path.

Of course to Obama a “pro-growth” economic plan includes spending trillions of dollars that you do not have without any regard for what you are doing to future generations.

In Greece, the recent elections failed to produce a new government, so new elections will be held on June 17th.

The following is what John Praveen, the chief investment strategist at Prudential International Investments Advisers, had to say about the political situation in Greece recently….

“If the pro-euro major parties fail to muster enough support to form a coalition and the radical left Syriza party and other anti-euro, anti-austerity parties secure a majority, the risk of a disorderly Greek exit from the Euro increases and could roil markets”

Right now, polls show the leading anti-austerity party, Syriza, doing very well.  The leader of Syriza, Alexis Tsipras, has declared that he plans “to stop the experiment” with austerity and that what the rest of the eurozone has tried to do in Greece is a “crime against the Greek people“.

But the Germans do not see it that way.  The Germans just want the Greeks to stop spending far more money than they bring in.

The Germans do not want to endlessly bail out the Greeks if the Greeks are not willing to show some financial discipline.

As we approach the June 17th elections, the financial markets are likely to be quite nervous.  According to Art Hogan of Lazard Capital Partners, many investors are deeply concerned about how “sloppy” a great exit from the euro could be….

“Next week is only one of the four weeks we have to wait until the Greek election. Every utterance out of Greece makes us think about their [possible] exit and how sloppy that could be”

In fact, there are reports that preparations are rapidly being made for a Greek exit.  According to Reuters, “contingency plans” for the printing of Greek drachmas have already been drawn up….

And even EU officials are now acknowledging that plans for a Greek exit from the euro are being developed.  The following is what EU Trade Commissioner Karel De Gucht said during one recent interview….

?A year and a half ago, there may have been the danger of a domino effect,? he said, ?but today there are, both within the European Central Bank and the European Commission, services that are working on emergency scenarios in case Greece doesn’t make it.?

When these kinds of things start to become public, that is a sign that officials really do not expect Greece to remain a part of the euro.

The public coffers are seen running dry at the end of June, but this will depend on two key factors. First, revenue collection: In the first 10 days of May, inflows were about 15 percent lower than projected but there are fears that the slide may reach 50 percent. The GAO will have a picture for the first 20 days on May 23, while the last three days of the month are considered crucial, when 1.5 billion euros of the month?s budgeted total of 3.6 billion are expected to flow in.

Second, whether the IMF and EFSF installments are disbursed: This is not certain, as the decision will be purely political for both providers and evidently partly linked to political developments. Earlier this month the eurozone approved a disbursement 1 billion short of the 5 billion euros that were expected.

If Greece runs out of money and if the rest of Europe cuts off the flow of euros, Greece would essentially be forced to leave the euro.

So the last half of June looks like it could potentially be a key moment for Greece.

Meanwhile, the Greek banking system is struggling to survive as hundreds of millions of euros get pulled out of it.  The following is from a recent CNN article….

The Greek financial system is straining hard for cash.

Consumers and businesses are making massive withdrawals from Greece’s banks — leading to concern the beleaguered nation could be forced out of the eurozone by a banking crisis even before its government runs out of cash.

Deposits are the lifeblood of any bank, and Greeks pulled 800 million euros out of the banking system on Tuesday alone, the most recent day for which figures are available.

If Greece does leave the euro and the Greek banking system does collapse, that is going to be a clear signal that a similar scenario will be allowed to play out in other eurozone nations.

That is why Jim Cramer, myself and many others are warning that there could soon be bank runs all over the eurozone.

Sadly, the banking crisis in Europe just seems to get worse with each passing day.

For example, the Telegraph has reported that wealthy individuals are starting to pull money out of Spanish banking giant Santander….

Customers with large deposits have started withdrawing cash from Santander, the bank has admitted, as it tried to reassure concerned members of the public that their money is safe.

Round and round we go.  Where all this will stop nobody knows.

If Greece does end up leaving the euro, that could set off a chain of cascading events that could potentially be absolutely catastrophic.

Former Italian Prime Minister Romano Prodi recently stated that the “whole house of cards will come down” if Greece leaves the euro.

And if the “house of cards” does come down in Europe, that is going to greatly destabilize the global derivatives market.

You see, the truth is that the global derivatives market is very delicately balanced.  The assumption most firms make is that things are not going to deviate too much from what is considered “normal”.

If we do end up seeing “financial anarchy” in Europe, that is going to greatly destabilize the system and we could rapidly have a huge derivatives crisis on our hands.

And as we saw with JP Morgan recently, losses from derivatives can add up really fast.

Originally, we were told that the derivatives losses that JP Morgan experienced recently came to a total of only about 2 billion dollars.

Now, we are told that it could be a whole lot more than that.  According to the Wall Street Journal, JP Morgan could end up losing about 5 billion dollars (or more) before it is all said and done….

J.P. Morgan Chase & Co. is struggling to extricate itself from disastrous wagers by traders such as the “London whale,” in a sign that the size of its bets could bog down the bank’s unwinding of the trades and deepen its losses by billions of dollars.

The nation’s largest bank has said publicly that its losses on the trades have surpassed $2 billion, and people familiar with the matter have said they could over time reach $5 billion.

And if Europe experiences a financial collapse, the losses experienced by U.S. firms could make that 5 billion dollars look like pocket change.  The following is from a recent article by Graham Summers….

According to Reuters once you include Spain and Italy as well as Credit Default Swaps and indirect exposure to Europe, US banks have roughly $4 TRILLION in potential exposure to the EU.

To put that number in perspective, the entire US banking system is $12 trillion in size.

Interesting days are ahead my friends.

Let us hope for the best, but let us also prepare for the worst.

Jim Cramer Is Predicting Bank Runs In Spain And Italy And Financial Anarchy Throughout Europe
http://endtimeinfo.com/2012/05/jim-cramer-is-predicting-bank-runs-in-spain-and-italy-and-financial-anarchy-throughout-europe/
European Unioneurozonefinancial crashGreece
Previous ArticleCustomer Shocked After Realizing His ?Allocated? Gold Was Not in Swiss BankNext Article?Barcode everyone at birth?