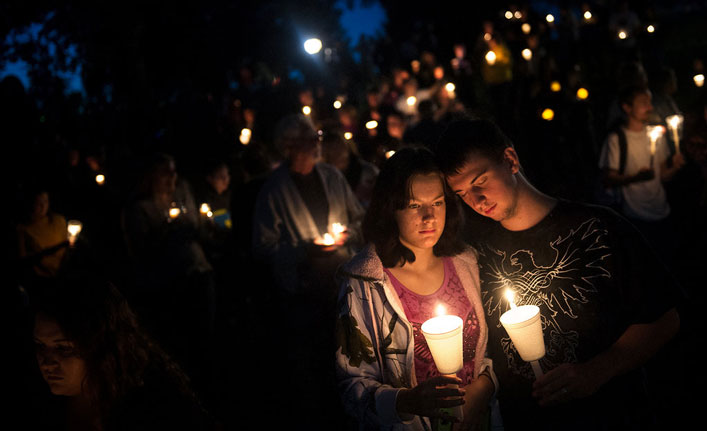 Targeting victims such as an Indiana pizzeria and a low-level government clerk named Kim Davis, the leftist culture war invoked and encouraged words of extreme violence and hatred toward all targeted Christians. Death threats from the left became commonplace, and any person who spoke out against abortion or gay marriage was instantly targeted with threats of violence across social media.

Now the leftist rhetoric against Christians has apparently turned to violence. The Umpqua Community College shooting that took place in Oregon yesterday was carried out by a violent murderer who reportedly targeted Christians, no doubt playing off the leftist hatred and intolerance that has been ginned up in the mainstream media over the past several years.

“A woman who claimed to have a grandmother inside a writing class in Snyder Hall, where a portion the massacre unfolded, described the scene in a tweet,” reports the New York Post:

Religious discrimination and execution of Christians

What kind of person hates Christians so much that he wants to murder them by shooting them in the head? Someone who watches too much MSNBC, probably, and has been made mentally ill by the vile hatred and intolerance spewed by the political left against conservatives and Christians. I have no doubt that this shooter was either taking psychiatric drugs or was deeply influenced by leftist media.

The liberal media, which once demanded “tolerance” for gays and members of the LGBT community, has now become militantly intolerant of all the other beliefs it doesn’t like.

Why is no one calling out the leftist media’s own bigotry and intolerance being expressed daily through its hate speech and militant attacks on innocent Americans who hold non-leftist beliefs?

As someone who truly practices universal tolerance of other people’s religions, lifestyles and personal beliefs, I’ve decided I will not remain silent while the leftist media claims to occupy the moral high ground on “tolerance” but is actually practicing the very same sort of bigotry and intolerance it once opposed!

As I’ve stated before, if your “tolerance” isn’t universally applied, it isn’t tolerance at all. If intolerance is wrong when directed at gays, African-Americans, women or Latinos, why is that same intolerance somehow socially acceptable when it is directed against Christians, veterans, white people and pro-lifers?

Actor James Woods, who often takes to Twitter to express political views, has been using the forum to comment on the yesterday’s murders at Umpqua Community College in Oregon.

26 year-old gunman Chris Harper Mercer opened fire on the campus on Thursday, killing nine people and wounding seven. Mercer reportedly singled out Christians for death by asking the religion of potential victims before firing on them. Mercer was then shot and killed by law enforcement.

In a series of tweets on October 2, Woods argued that because the victims were Christian, both President Obama and the media would lose interest in the story.

“NY Times writes a front page story about a hate massacre targeting Christians without using the word ‘Christians,'” Woods tweeted, linking to story in the New York Times. Then: “If it is determined that the Oregon shooter targeted Christians specifically, that’s the last we will hear of it on MSM [mainstream media].”

Woods then tweeted about President Obama’s potential reaction to the crime: “Now that it is recognized that the terrible Oregon tragedy was an assault on Christians, will the President still sing Amazing Grace there?” Finally Woods tweeted a picture of the president with the comment: “Hate crime massacre of Christians finally silences Obama. #LiberalLaryngitis.”

My God, what extraordinary people these young Christians were. The courage of their conviction is unimaginable. pic.twitter.com/tfHFK4o0u7

“Whosoever therefore shall confess me before men, him will I confess also before my Father which is in heaven.” Matthew 10:32

Oregon campus shooter demanded victims state their religion... Christians were then executed with a bullet to the head
http://endtimeinfo.com/2015/10/oregon-campus-shooter-demanded-victims-state-their-religion-christians-were-then-executed-with-a-bullet-to-the-head/
Christian persecutionChristianitypersecutionsigns of the times
Previous ArticleHungary and the refugeesNext ArticleKurzweil Thinks by 2030, We?ll Be Godlike