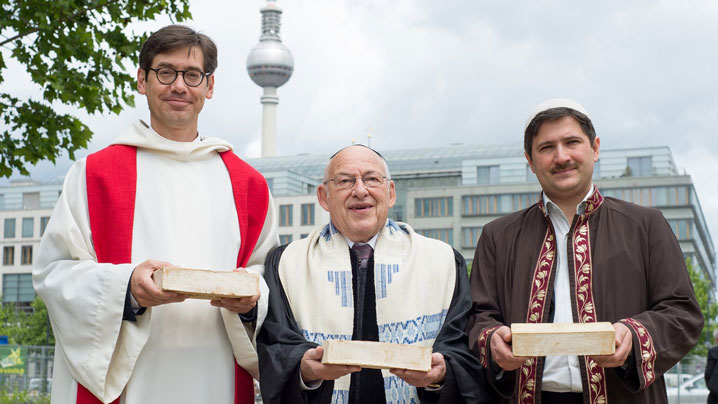 The march to one world religion is stepping at a much faster beat today, as ?The House of One? being built in Berlin, Germany plans to accommodate the three major monotheistic religions of Judaism, Islam and Christianity under one roof.

Berlin is soon to become home to something truly unique. Jews, Christians, and Muslims are planning to build a house of worship here ? one that brings a synagogue, a church, and a mosque together under one roof. The three separate sections will be linked by a communal room in the center of the building. This will serve as a meeting place, where worshippers and members of the public can come together and learn more about the religions and each other.

Even though the Jewish population in Berlin is small, and Islam is rapidly increasing, each of the major faiths will be granted equal size worship areas to allow adherents to practice their religious faith.

Kandir Sanci, the Islamic Imam assigned to the new effort, had this to say:

?The equal relationship between the religions that defines the work within the association and that was applied in all the decision-making processes throughout the architectural competition highlights one of the hallmarks of The House of One: an atmosphere of openness that gives us, Muslims in this city and in this country, a publicly tangible place to call home and a place where we are taken seriously ? in the way we interpret and observe our religion, and in the way it can be part of a fruitful exchange with the city and other religions.?

HISTORY OF ?THE HOUSE OF ONE? SITE

According to the website Haaretz.com, ?The House of One? is being built on the remains of Berlin?s earliest church, Petrikirche, also known as St. Peter?s Church on Periplatz.  The original church was the core of the city, and the location of Periplatz is considered the birthplace of Berlin.

The destruction of the church took place in the last days of World War II . While the church survived the bombing unscathed, it came under fire in April 1945 as  SS units were entrenched inside. After the war ended, only ruins remained. Since the German government had no interest to finance a reconstruction of the church, and road planning in the way, the parish council in 1960 was forced to agree to demolition. The last remnants of buildings were demolished in 1964.  In spite of these setbacks, a core group of Christians has always maintained a close presence with the church site as caretakers, meeting nearby over the past several decades.

Ironically, this current project of religious ecumnenicalism being built on the rubble of an ancient cathedral of the Christian faith mirrors the efforts of global religion to supplant the true faith of the Cross.

In their efforts to bridge across religions, ?The House of One? declares:

When they embarked on their collaboration in 2010, the partners realized that it would be impossible to clear up in advance all the difficult theological and political questions raised by the project. With this in mind, they drew up a charter that, in connection with the founding of an association, created a legally binding, transparent structure that will serve as the foundation for all other plans from here on in.

The charter states that the individual institutions each represent their own religion, but that they do not make any claim to exclusivity. The institutions and schools of thought are invited to join the project and share some of the aspects that make their respective religion so diverse. To do so, they must agree to abide by the principles contained in the charter.

Church-Synagogue-Mosque to be Built in Berlin ? The House of One
http://endtimeinfo.com/2016/05/church-synagogue-mosque-to-be-built-in-berlin-the-house-of-one/
ChristianityecumenismIslamJudaismworld religion
Previous ArticlePope Francis: Spreading the Gospel no different than ISIS jihadNext ArticleNBC: Your Children Will be Microchipped “Sooner rather Than Later”