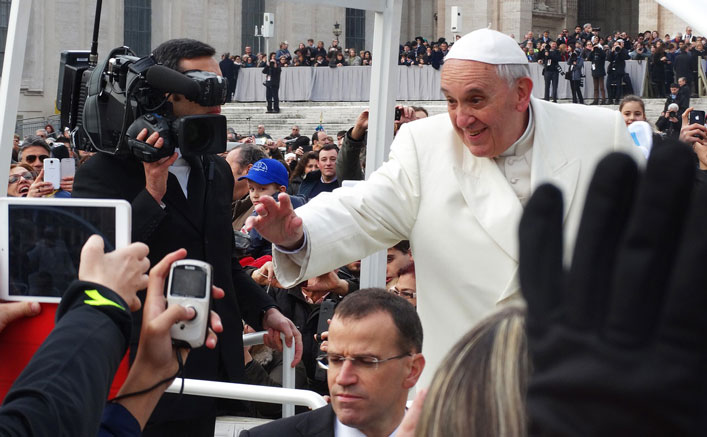 Pope Francis said in an interview with France?s La Croix that Jesus? call to spread the Gospel was no different than the jihad being waged by radical Islamists.

As part of the discussion published Tuesday, the pope told La Croix:

?Today, I don?t think that there is a fear of Islam as such but of ISIS and its war of conquest, which is partly drawn from Islam,? he told French newspaper La Croix. ?It is true that the idea of conquest is inherent in the soul of Islam, however, it is also possible to interpret the objective in Matthew?s Gospel, where Jesus sends his disciples to all nations, in terms of the same idea of conquest.?

The Pope also said he ?dreaded? hearing about the ?Christian roots of Europe? because, to him, they take on ?colonialist overtones? and he called on European nations to ?integrate? Muslim migrants into the continent.

?This integration is all the more necessary today since, as a result of a selfish search for well-being, Europe is experiencing the grave problem of a declining birth rate,? he stated. ?A demographic emptiness is developing.?

Pope Francis also claimed that the state of the global economy has widened a perceived gap between Christianity and Islam.

?The initial problems are the wars in the Middle East and in Africa as well as the underdevelopment of the African continent, which causes hunger,? explained Francis. ?If there is so much unemployment, it is because of a lack of investment capable of providing employment, of which Africa has such a great need. The great majority of humanity?s wealth has fallen into the hands of a minority of the population. ? A completely free market does not work. Markets in themselves are good but they also require a fulcrum, a third party, or a state to monitor and balance them.?

?In other words, [what is needed is] a social market economy.?

Pope Francis has since doubled down on his open-borders immigration stance, saying at his acceptance speech for the Charlemagne Prize on May 6th from the Vatican:

?I dream of a Europe where being a migrant is not a crime, but a summons to a greater commitment on behalf of the dignity of every human being. I dream of a Europe that promotes and protects the rights of everyone, without neglecting its duties toward all. I dream of a Europe of which it will not be said that its commitment to human rights was its last utopia. We, the heirs of their dream, are tempted to yield to our own selfish interests and to consider putting up fences here and there. Their vision inspires us to build bridges and tear down walls. What has happened to you, the Europe of humanism, the champion of human rights, democracy and freedom? What has happened to you, Europe ? the home of poets, philosophers, artists, musicians, and men and women of letters? What has happened to you ? the mother of great men and women who upheld, and even sacrificed their lives for, the dignity of their brothers and sisters??

Pope Francis? interesting reference to humanism, highlights the increasing rejection of God throughout Europe, and coincides with President Obama?s quib that the Nordic states ? home to Europe?s most secular, humanist, and atheist population blocks ? would do a great job running the EU.

Pope Francis: Spreading the Gospel no different than ISIS jihad
http://endtimeinfo.com/2016/05/pope-francis-spreading-the-gospel-no-different-than-isis-jihad/
ISISThe Popeworld religion
Previous ArticleDrawing on history, Cameron argues Britain is safer in the EUNext ArticleChurch-Synagogue-Mosque to be Built in Berlin ? The House of One