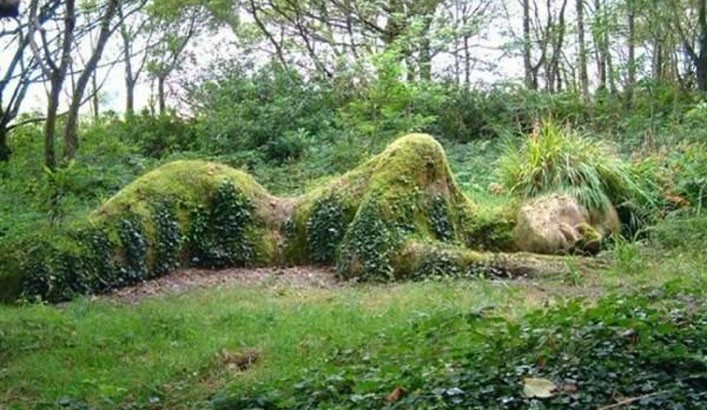 While environmentalists have always espoused something of a religious dedication to mother nature, at least for those not in it for the money, it was always viewed as something acceptable — and even good — by much of the first world. There’s been heated disagreement about this, especially from conservationists, but as it stands environmentalism is one of today’s most in vogue causes.

But if we thought environmentalism, with some of its most ardent supporters suggesting prison time for “deniers,” and holding journalists hostage inside protest camps, was extreme, then brace yourself, because we have yet to find the bottom of environmentalism’s well of weird.

Recently, an article came out in Vice that detailed the practice of “ecosexuality.” To put it bluntly, these are enviro-activists who believe that having sex with the earth is somehow good for both it, and you.

But it’s more than just strapping some parsley to your face, and getting sensual with an oak tree. According to Annie Sprinkle and Elizabeth Stephens, two modern artists and environmental activists, this is a kind of sexuality that involves actual love for the earth, both philia and eros. It’s a kind of bond they wanted to bring into the mainstream, and they set out to do just that by putting on stage shows, and opening a “bath house”:

It wasn’t until 2008 that it began its evolution toward a fully-fledged social movement, when Sprinkle and Stephens began officiating ecosexual weddings. The two artists had been active in the marriage equality movement, and they wanted to harness that energy for environmental causes. Stephens has said that their aim was to reconceptualize the way we look at the earth, from seeing the planet as a mother to seeing it as a lover.

According to sociologist Jennifer Reed at the University of Nevada, ecosexuality has been around since the early 2000s, when it began appearing on dating profiles. She says that now, the ecosexual movement has seen a marked increase in people choosing it as their sexual preference in the past two years.

Sprinkle and Stephens even led a group of more than 100 ecosexuals in San Francisco’s pride parade in a ribbon cutting, that added an “E” to the LGBT lineup.

While this group is concerned about protecting the environment, it’s not falling in line with some of the more popular advocates of environmentalism you’ve seen thus far, as UNLV School of Community Health Sciences’ Amanda Morgan lays out:

Morgan describes ecosexuality as a means of moving beyond the “depressing Al Gore stuff” that people often associate with environmentalism. Her hope, and that of other ecosexuals … is that it can gives the average person a way of engaging with the issue that is accessible and fun, and that creates a sense of hopefulness.

In the end, it is a roundabout way of getting to the same goal shared by most enviro-activists. There will not be many TED talks given about ecosexuality by politicians or institutions, but the druidism is there, and more intense nevertheless.

If you think this is too extreme, and will never make it to the mainstream, then I would remind you that this is 2016. If anything, this year has taught us to take nothing off the table.

\'Ecosexuality\' is on the rise, and it is exactly what it sounds like
http://endtimeinfo.com/2016/11/ecosexuality-is-on-the-rise-and-it-is-exactly-what-it-sounds-like/
deceptionend timesame sex marriagesustainable development
Previous ArticleWhen Good People Share Bad Info – Here’s Why You Need to Fact Check before You Click ShareNext ArticleEU Just Voted To Create Its Own Army, Britain May Be Forced To Pay For It ? In Spite Of Brexit