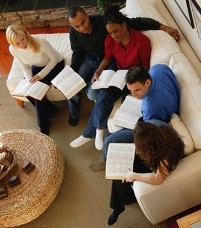 A southern California city has ordered a Friday night Bible study involving about a dozen people to shut down its meetings by Good Friday or members could face financial sanctions. Or they could apply to purchase an expensive permit from the city government.

The new case is similar to a dispute last week in Gilbert, Ariz., and another last year in San Diego County.

Now, in Rancho Cucamonga, legal experts defending Bible study members say the city is targeting a Bible study for banishment, and officials say they are “not budging.”

In the previous cases, San Diego County officials apologized after a code enforcement officer tried to shut down a Bible study, and in Gilbert, officials told WND last week they were working on a change in a zoning requirement that had been interpreted by staff members to ban Bible studies from residences.

In Rancho Cucamonga, however, the city apparently is intentionally pursuing the closure of a Bible study, according to Brad Dacus, whose Pacific Justice Institute is working on the case.

“The city’s stance has similarities to, but is perhaps even harsher than a pending situation in Gilbert, Ariz., and a flare-up last year over a home Bible Study in San Diego County,” his organization confirmed.

Rancho Cucamonga officials are demanding that the small home Bible study group stop meeting ? or apply to purchase a Conditional Use Permit that also would be required for a full church operation.

Dacus said the study group has been meeting Friday nights and averages about 15 people. Members are affiliated with Shiloh Tabernacle, which rents a community center for Sunday services.

The city recently dispatched a letter to the homeowner insisting the study is not allowed because it is a “church,” Dacus said. In the city, churches are required to obtain a “Conditional Use Permit” in residential areas.

“The city has also indicated that no CUP would be granted and the gatherings must cease by Good Friday, April 2,” PJI said.

Senior Counsel Michael Peffer, who heads the organization’s Southern California office, represents the homeowner where the Bible study meets and is contesting the orders.

“Imposing a CUP requirement on a home Bible study is manifestly absurd and unjust,” Dacus said. “I don’t know of a single court in America that would approve their actions.”

His organization previously has guided churches through the CUP process, which requires public hearings, traffic studies, architectural design reviews and even seismic retrofits ? a process that can cost hundreds of thousands of dollars.

“We will give the city a chance to rescind its letter without litigation, but we are fully prepared to take this as far as is necessary to defend this Bible study group ? and countless others like it,” he said.

Multiple WND messages left with members of the city’s building department as well as other city officials were not returned.

Dacus said the city’s stance is a significant problem because the definition of a church is so broad.

“According to their definition a family praying over their dinner would qualify as a church,” he told WND.

The precedent that would be created should the rule stand, he said, should alarm religious people across the nation.

“When you step back and look at communist China, home churches are being persecuted there. This isn’t any different. And this isn’t even a church, just a Bible study, facing the same ultimatums, the same demands as in communist China.

“Make no mistake, if we let the city of Rancho Cucamonga get away with this, it will be a green light to every other city in the U.S,” he said.

The city, however, has no similar restrictions for Monday night football parties or various other events that would be held in homes, PJI pionted out.