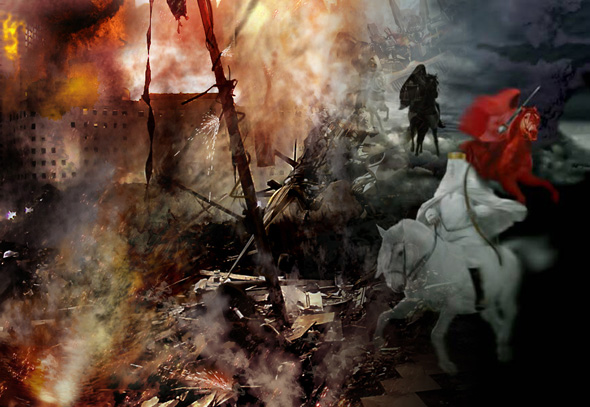 At first reading, the book of Revelation is not only mysterious but also confusing. Understanding how the book is structured helps it become clearer.

Revelation can be divided into three sections of seven chapters each, with chapter 22 (which is basically a continuation of chapter 21) added to the last section.

The forces of evil will never be able to completely overcome God?s people.

The first section begins with an introduction, followed by letters of correction and commendation from the apostle John to seven ?churches? of his day?communities of believers (Acts 2:44-47). Then, beginning with chapter 4, John relates his experience of being taken to God?s throne room in Heaven, where he witnesses Jesus opening a mysterious scroll that is sealed with seven seals. As each one is opened, a spiritual entity or an Endtime event is revealed.

In the following seven chapters, the Lord zooms in to give a more detailed look at the coming three-and-a-half years of worldwide trouble known as the ?Great Tribulation? (Matthew 24:15-21). Here we learn of the spiritual struggle between good and evil, and of the rise of the Antichrist, who is depicted as ?the Beast.? These events culminate in the Second Coming of Jesus and the gathering to Him of all believers.

The last section begins with events on earth immediately after Jesus? return. The chronological order of events is interrupted by a two-chapter description of ?Babylon the Great,? symbolizing the brazen materialism of this day and age, and more information on the Beast. It then returns to the chronological account of future events, beginning with a great celebration in Heaven with Jesus and those He has gathered to Him from earth at the Second Coming of Christ. This is followed by the Battle of Armageddon, where Jesus and His followers defeat the Antichrist, and continues through the thousand-year reign of Christ on earth to the happy ending when the Heavenly City, New Jerusalem, comes down to its eternal resting place on the newly recreated planet Earth and God Himself dwells with the saved (Revelation 21:2-3).

One question nearly everyone has is whether John?s descriptions are literal or symbolic. Undoubtedly there are some of each. Another thing to bear in mind is that he was seeing in a vision things he had never seen before?things of our day?so he had to describe them in the terms of his own experience and in language that the people of his day could understand. For example, John had never seen tanks or planes or guns or bombs or heard their roar. So if he was watching modern warfare, he might describe tanks as chariots or warplanes flying at then incomprehensible altitudes as locusts.

Many things in the book of Revelation remain mysteries or topics of speculation. As future events unfold, Jesus will help us understand more.

The Bottom Line
The forces of evil will never be able to completely overcome God?s people. In spite of all the wrath and atrocities that bestial man will bring against God?s children during the Great Tribulation?the coming three-and-a-half-year worldwide reign of terror against people of all faiths by the devilish dictatorship of the Antichrist and his regime?multitudes of us Christians will still be here to joyously welcome Christ?s triumphant re-entry into the earth?s atmosphere (Matthew 24:21, 29-31). Jesus is the only One who can stop us, and He will stop us then for a little while to take us home for a party, the marriage supper of the Lamb in Heaven! Then we?ll come back here and put a stop to the reign of the wicked! (Revelation chapter 19). –D.B.B.

?The Revelation of Jesus Christ, which God gave Him to show His servants?things which must shortly take place. And He sent and signified it by His angel to His servant John? (Revelation 1:1).

What: The Revelation of Jesus Christ??things which must shortly take place.?

Who: The divine author was God Himself, who gave the vision to Jesus Christ ?to show His servants.?

How: Jesus relayed the vision through a heavenly messenger to the apostle John?also known as John the Beloved, one of Jesus? original 12 disciples and the author of the Gospel of John?who wrote it down and sent it to the Christians (referred to collectively in the book of Revelation as churches) in seven cities in the region that roughly corresponds with modern-day Turkey.

Where: John received the vision on the Isle of Patmos in the Aegean Sea, where he had been banished during the persecution of Christians by the Roman Emperor Domitian ?for [spreading] the Word of God and for the testimony of Jesus Christ? (Revelation 1:9). It is believed that about a year after receiving the vision, John was released and permitted to return to Ephesus (in modern-day Turkey).

When: It is believed that John received this vision in 95 ad and wrote it down the following year, in 96 ad.

Why: Ultimately so that we who are living today would understand the events of the Endtime as they unfold. ?You, brethren, are not in darkness, so that this Day [Jesus? return] should overtake you as a thief? (1 Thessalonians 5:4).