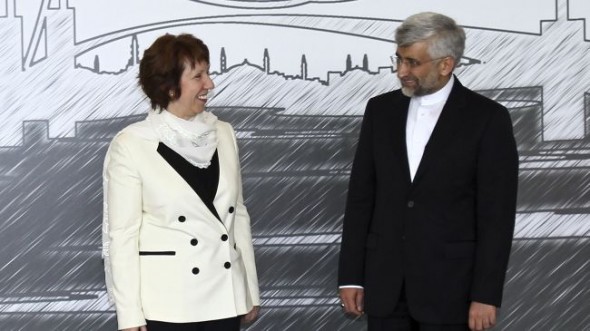 Israel has responded to word from Istanbul on Saturday that Iran and Western diplomats have decided to continue talks on Iran?s nuclear program.

On Sunday, Channel 10 in Israel ?broadcast a detailed report on how Israel will go about attacking Iran?s nuclear facilities in the event that diplomacy and sanctions fail and Israel decides to carry out a military strike,? reports The Times of Israel.

Alon Ben-David of Channel 10 said the attack will not come before the P5+1 talks with Iran that will resume in May following a meeting on Saturday. He said ?the coming summer will not only be hot but tense.? Ben-David added that ?years of preparations are likely to come to realization? and ?the moment of truth is near.?

Israeli PM Benjamin Netanyahu said on Sunday that the P5+1 talks have given Iran a ?freebie.? He demanded Iran stop all enrichment immediately and dismantle its Qom nuclear facility. ?I believe that the world?s greatest practitioner of terrorism must not have the opportunity to develop atomic bombs,? he said prior to a meeting with U.S. Senator Joe Lieberman.

Lieberman is a longtime advocate of taking a hardline against Iran. In February, he joined a bipartisan coalition of senators who promised to support an attack on Iran when the country becomes capable of producing nuclear weapons. Iran can now enrich uranium at 20 percent. More than 90 percent enrichment is required to produce a nuclear weapon.

Iran sat down with the United States, Russia, China, Britain, France and Germany on Saturday in Istanbul, Turkey. According to an EU representative, diplomats ?expect that subsequent meetings will lead to concrete steps towards a comprehensive negotiated solution which restores international confidence in the exclusively peaceful nature of the Iranian nuclear program.?

?While the atmosphere today was positive and good enough to merit a second round, we continue to stress ? that there is urgency for concrete progress and that the window for a diplomatic resolution is closing,? said a senior U.S. official on Saturday.

During the meeting, Chief Iranian negotiator Saeed Jalili said his country will not accept a demand that it close down plants which enrich uranium to 20 percent fissile material. Despite this, diplomats say the meeting represents significant progress following months of stalemate on the issue.

Iran states it has a legal right to enrich uranium for peaceful purposes under the Non-Proliferation of Nuclear Weapons Treaty, or NPT, and further says that it ?has constantly complied with its obligations under the NPT and the Statute of the International Atomic Energy Agency.?

In 2007, U.S. intelligence agencies concluded that Iran had stopped its nuclear weapons program in 2003. A National Intelligence Estimate issued during the Bush administration said all 16 American spy agencies ?do not know whether it currently intends to develop nuclear weapons.?